With over 44% of men and 55% of women now expected to live into their 90s, many consumers will outlive their private savings by 5 years and some by at least 10 years.

Current retirement income products such as life annuities are unpopular due to low returns mostly caused by the high costs charged by Insurers, which act as centralized “guarantors”. 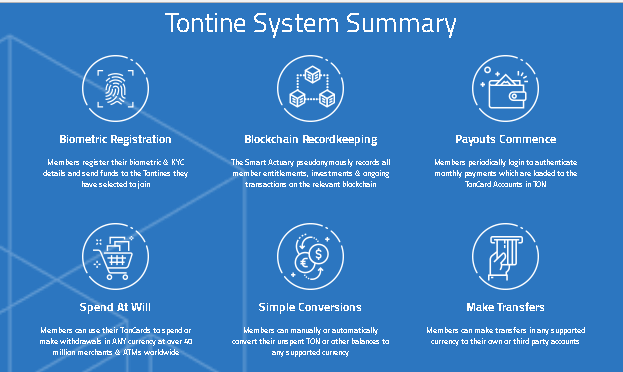 We propose a solution to the costly central guarantor problem by using our patent pending peerto-peer tontine pensions administered by an unbiased, mathematically robust smart-actuary which ensures that the pension is ALWAYS fully funded. And because tontine pensions provide lifetime income without requiring a guarantor, they significantly reduce the cost of providing pension benefits and thus significantly increase the income paid out to retirees.

Tontines are a 365-year-old financial innovation which successfully financed many European countries and states as well as numerous private projects such as roads, bridges and hotels. They make periodic payouts shared among their members for as long as they live. In later years, as the number of surviving members declines, the payout per-member rises, often dramatically.

Tontines were first offered in the US in 1868 by insurance companies and they were wildly successful. Over 50% of households invested the modern equivalent of $170Bn before Insurer malpractice caused sales to halt after a 1906 investigation revealing improper uses of capital as well as tampering with the ledger of members which undermined trust in the whole process.

In the century long absence of the tontines, retirement savings rates have plummeted.

2009 saw the emergence of distributed ledger technologies for immutable financial recordkeeping which creates a new form of pseudonymous trust between users based upon math.

As such, consumers can now safely and collectively self-insure the financial risks of living longer by entering into secure, low-cost peer-to-peer tontines.

This paper proposes a fully regulated peer-to-peer tontine issuing ecosystem which can offer: 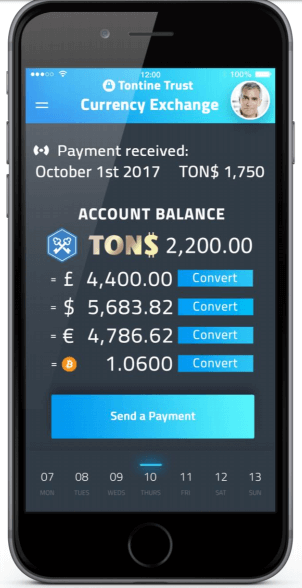 Creating a Global Solution: A World of Tontine Flavors

Once the Smart Actuary is integrated with the custodian(s), issuing new Tontines denominated in different currencies and investing in different asset classes is relatively straightforward for different types of consumers.

Mainstream consumers segmented into narrow age brackets (initially up to 5 years apart) will be able to join ETF Tontines which will invest predominantly in an ultra-diversified mix of the safest, most liquid funds in the world operated by some of the largest asset managers on the planet, for example, Blackrock ($5 Trillion in Assets Under Management), Vanguard ($4 Trillion), State Street ($2.4 Trillion) and others such as ICBC Credit Suisse.

In addition to better servicing the needs of mainstream consumers in developed markets, these types of ETF Tontines can provide a means of securing lifetime incomes for consumers in less developed markets as well as consumers in markets where there is significant exposure to political and/or financial system risks such as Venezuela or Zimbabwe.

In many countries and cultures, gold is considered the safest asset class.

TontineTrust intends to launch a new standard of pension products which will be backed by RMGs* see appendix, a new digital currency issued by The Royal Mint in Britain and backed 100% by physical gold held in the vaults of the Royal Mint.

Whilst we do not advocate that any saver, no matter how much of a goldbug, should have their life savings exposed to only a single asset class, we do believe that Gold-Standard Tontine Pensions should play a role in every savers lifetime income portfolio.

A small but growing section of the global population has eschewed the FIAT economy and are now partly or wholly managing their financial affairs within the cryptoeconomy. This has even led to the development of Bitcoin IRAs and now Ethereum IRAs.

For such cryptocapitalists, there are still no financial products which directly address longevity risk.

Crypto Tontines can address this problem by allowing such consumers, or the organizations they work with, to contribute towards retirement savings schemes denominated in Bitcoin or whole portfolios of cryptocurrencies. This will ensure that such consumers can put in place a secure crypto denominated lifetime income stream which may still carry some volatility, but which can nevertheless be expected to remain always-fully-funded.

We have in fact already received enquiries from heads of multinational corporations as well as an envoy of a financial ministry seeking information as to how they could utilize our platform to issue corporate pension schemes and new social security systems respectively. 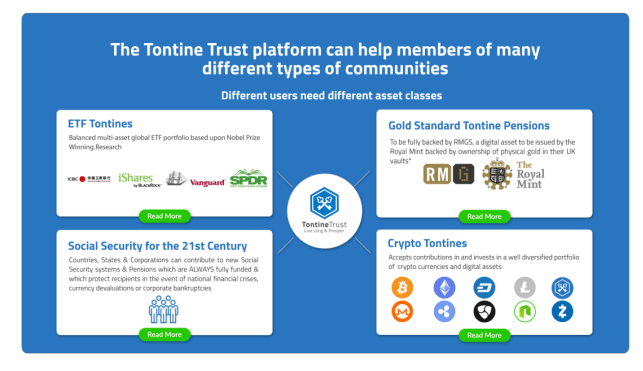