IceBreakerAR will bridge the virtual world with reality by providing a revolutionary tool that removes the core barriers which prevent humans from reaching out and interacting with one another. Users of IceBreakerAR will have the confidence to approach each other and be equipped with conversational tools which can assist initiating the interaction in an innovative and fun manner, from whether the user is seeking a relationship, friendship or networking/business opportunity. In addition, all user data is secured in the blockchain thereby providing the highest standard of security and integrity.

Our mission at IceBreakerAR is to enable more meaningful connections in your life. 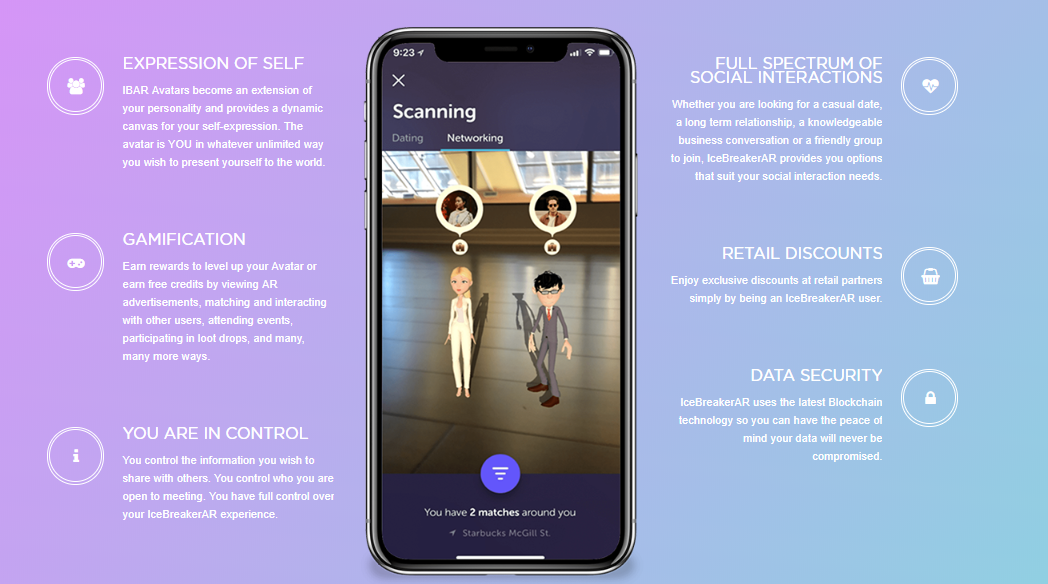 Dating, meeting, career networking websites and apps have not undergone a meaningful evolution since entering the market in the early 2000’s. The most recent progression is simply porting the website onto smart devices, but the mechanism has largely been passive. Users must create a profile, scroll through innumerable matches, strike a conversation and attempt to move the online connection to the real world. In addition, they suffer from the same core issues. 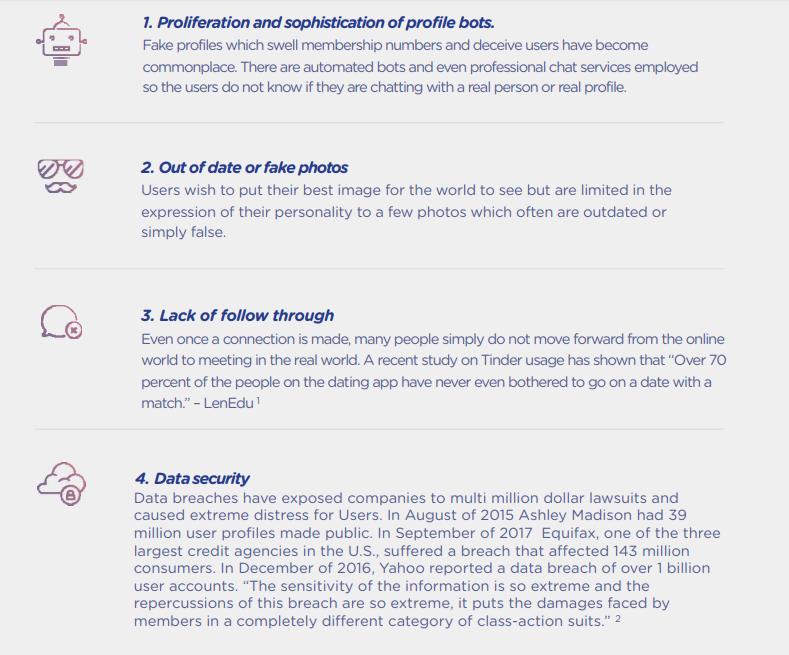 IceBreakerAR‘s solution is comprised of four components working in unison to provide a fun, secure and seamless user experience.

Users have the option of a quick profile creation to get up and running as quickly as possible, or a more detailed profile setup for higher quality matches. Once at least one profile from either Dating, Networking or groups has been created, the user can begin to scan the vicinity for matches. The user can also seamlessly switch between categories to scan if they created a profile in multiple categories.

When used to search for matches in the Dating category, Users will find a fun and vibrant experience. Some available features are:

When used to search for matches in the Networking features category, Users will be able to interact with like minded individuals whether at a conference, while traveling or virtually anywhere to grow their personal and professional network. Some available features are: 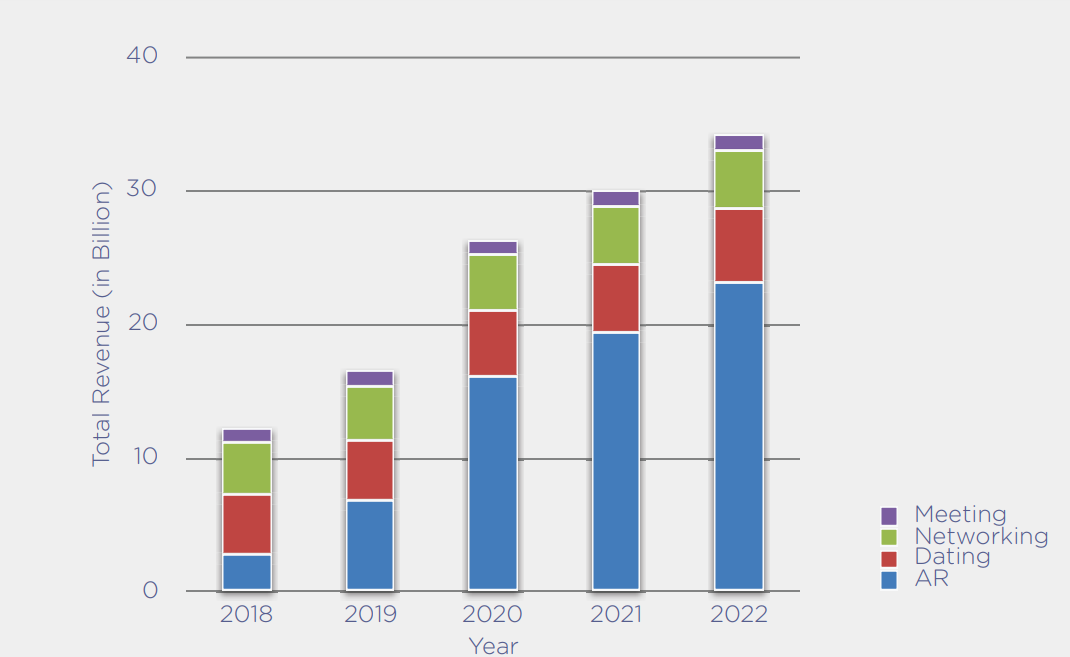 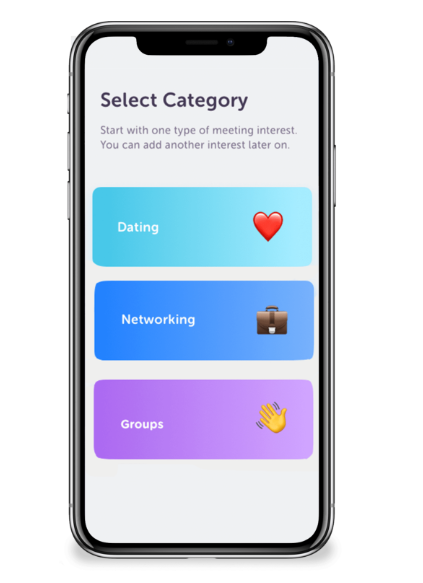 Traditional servers or data are generally centralized, making it a likely target for malicious attacks. By looking at the Equifax’s security breaches and other cybersecurity concerns arising in recent times. Instead of having a single or limited # of server’s that hackers can attack, decentralization via the blockchain greatly increases the difficulty. The more participants/nodes in a network, the more copies of the data there is. Therefore, if you want to tamper with the data, you will need to attack every single node on the network and alter all of their data simultaneously. Not only does blockchain make data tamper-proof, it is also hard to breach. Every “block” on a chain contains a certain amount of data, and when that block gets filled, much like a USB drive, it is encrypted and sealed forever. To get the full picture, hackers will need to hack not just the current block, but also every block before it. This is not only technically almost impossible, but it is costly, thereby reducing the incentive for malicious activities.

Essentially we would have the same set of data distributed across the world, we wouldn’t need to worry if we lose a node. This provides data resilience to IceBreakerAR, which gives peace of mind from any data corruption, server downtimes, backups, etc.. Blockchain

Having a decentralized network of nodes to maintain this ledger allows IceBreakerAR to offset and offload hosting, security, and maintenance costs. It removes a lot of the costs of IT staffing, Dev Ops, and infrastructural overhead.

With all of the above in place, you can be sure that everything that is logged or deployed on the blockchain, is accurate, and true.

All of this results in the ease of trust, and ease of the ability to do business in a transparent manner, without needing to trust the counter-party. You can simply leverage blockchain technology to let the data and facts speak for themselves.

Do currently systems and data infrastructures work? Sure, but they are not perfect. They only exist the way they do because there hasn’t been technology that could come along and offer a vast improvement until the introduction of Blockchain. 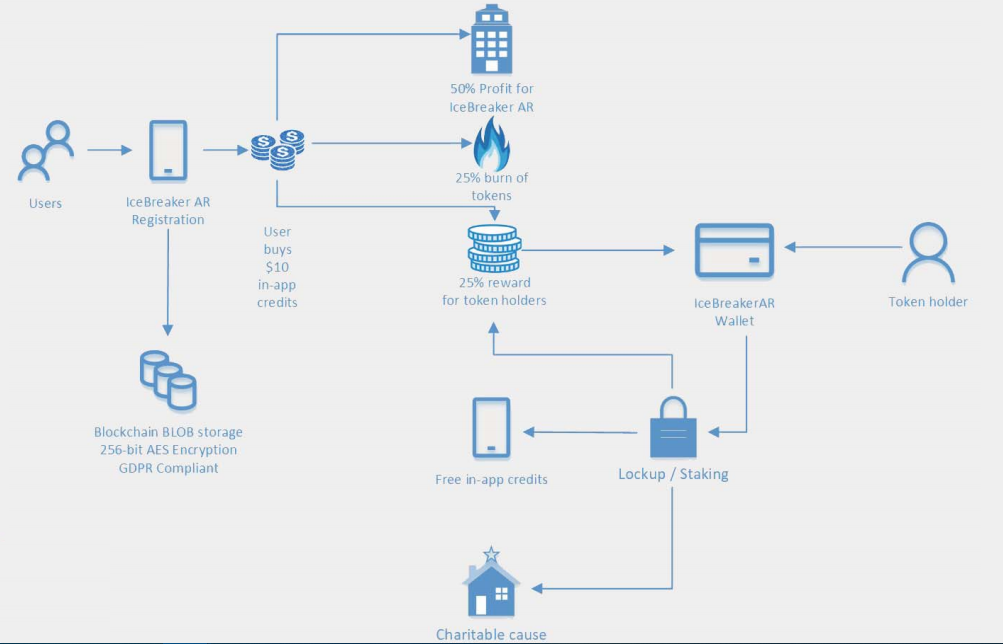 To only authorize a limited set of readers and writers, so-called permissioned blockchains have been recently proposed. Here, a central entity decides and attributes the right to individual peers to participate in the write or read operations of the blockchain. To provide encapsulation and privacy, reader and writer could also run in separated parallel blockchains that are interconnected.