FLUX — unique global gaming platform that unites all parts of gaming industry ecosystem where players, developers, traders, and gaming community can transform their time and needs in money using gaming token FLUX COIN. It is simultaneously a platform for competitive gaming, a marketplace for games, online broadcasting (streams) and a platform for trading in-game items.

Collectively, gaming industry has over 2.3 billion of users who produce a massive revenue and value for entrepreneurs and companies (over 105 billion USD yearly). A turnover of transactions that is going through gaming platforms is growing exponentially but at the same time leads to some issues.

One of the major problems is a lack of liquidity in the system. Gamers spend hours to improve their competitive skill and winning rate, collect rare artifacts, buy certain skins, improve their character but when they want to exchange one of these, they have to rely on centralized payment systems that most of external marketplaces provide. Meanwhile game developers earning are on average 30% reduced by popular markets and publishers.

We offer a system that will allow those players to get rewards for matchmaking competitions, trading items on the marketplace and even crowdfund their own idea inside of the platform. Investors and developers will be provided a certain commission from each game as well.

With the help of blockchain technology, the whole process will become a lot more transparent and automated, which makes such platform a good extension for existing industry and helps to integrate cryptocurrency in real business.

Flux’s vision is to cover global market in the gaming space and to create a full ecosystem which will benefit all of its users and stakeholders. We are glad to invite everyone to become a part of a worldwide global business.

Gaming industry is one of the biggest and promising markets on the planet. The biggest misconception is that is involves only the gaming part but there are so much more than this.

Gaming industry at its core is the biggest and the fastest growing industry in the world. Based on the latest research it has about 2.3 billion active players right now with an average of $108.9 billion of annual revenue.

A big portion of matchmaking services are currently focusing on eSports (400 million). However there are over 380 million of competitive game players outside of the eSports sector who use mobile and PC devices, and who are not on existing matchmaking platforms.

For example here is the audience list of TOP non-eSports competitive PC games for 2017: 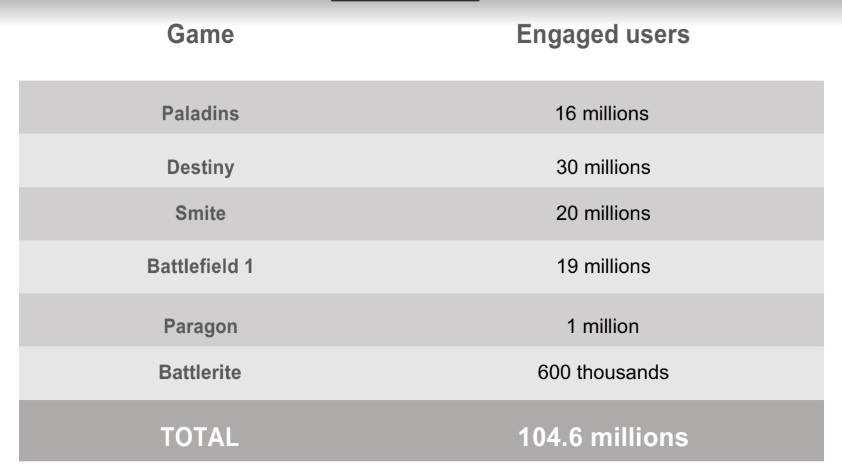 Global trading market for gaming industry have reached $7bn for 2017 with hundreds of billions of transactions processed the same year.

Steam, the biggest trading platform has on average about 370bn games sold annually. The market is big and is expanding every month.

Flux ecosystem unites all of the components of the industry. Now everybody can earn the rewards they deserve in Flux token that can be easily exchanged on the open market. 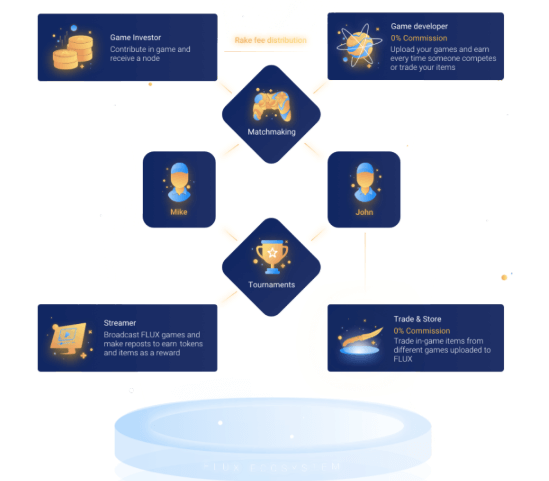 The ecosystem is built around the gaming processes. While players compete and earn in Game1 using Matchmaking Platform and trade items related to Game1 in FLUX Trading Platform, or purchase items in FLUX store, the Vendor (Game Creator) who have uploaded Game1 into FLUX Developer Market earns a part of transaction and betting fee.

In a case that GC attracted funds for creating this game in FLUX Crowdfunding platform, part of his earnings are also distributed between investors.

Moreover, the gaming process could be broadcasted using FLUX Streaming platform, and integration with Twitch, so the platform gains new audience, and Streamer receives rewards.

This complete ecosystem is built using multiple smart contracts system, so all described actions are processed absolutely transparent and fair.

Advantages for developers: Easy registration process for opening accounts; quick verification of games; revenue from each game session; 0% commission for each game transaction for competitive games; 2% commission for each game transaction for non-competitive games; continuous support from the FLUX team; rapid audience growth due to tournaments organized by the FLUX team.