Elysian – A decentralized platform to build Ecommerce websites on the blockchain

Elysian is an innovative new decentralized platform that will use the Ethereum blockchain to secure customer data, facilitate Ecommerce transactions, and drastically change user experience. The integration of smart contracts and blockchain technology will ultimately provide a higher level of security in the realm of Ecommerce. The interoperability of the platform will serve as the basis for future scalability and sustainable growth.

The integration of the Elysian token into the platform as a method of access to transactions provides entry into our ecosystem. Consumers will be incentivized to become incorporated into the Elysian community and play a vital role in the growth of the company.

Business to consumer (B2C) Ecommerce is a massive global market which, in 2017, surpassed $2 trillion in sales and is expected to have an annual growth rate of 9.9%.  Indeed, the most current estimation is that global Ecommerce sales will exceed $4 trillion by 2021.

The continual increase in Ecommerce sales is supported by several factors including: 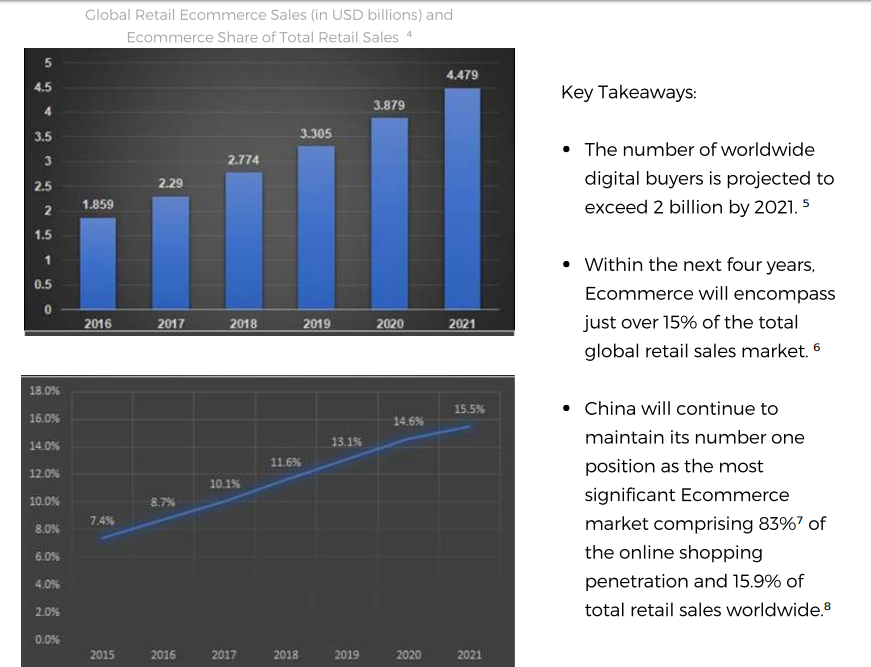 Given the enormous population existent within China, their dominance within Ecommerce is not surprising. Yet, this does not mean that Chinese consumers are wholly purchasing from Chinese retailers: 56% of global consumers, including Chinese respondents, who were surveyed by PWC revealed that they use Amazon as their Ecommerce retailer. ⁹ This phenomenon is not limited to China, as 57% of consumers in each international region, e.g., Latin America, North America, Europe, Africa, and EastAsia, enact purchases from nondomestic retailers

Despite the steady upward trajectory of mobile phone usage, a majority of consumers still prefer to make online purchases through a PC or a laptop.¹⁰ Chinese consumers, in particular, utilize mobile Ecommerce systems at a higher rate than their global counterparts; this is due to a broader acceptance of mobile third-party payment systems that maintain the flexibility of both online and in-person payment availability

As the market continues to steadily grow, statistical evidence shows that platforms such as Shopify and Woocommerce are thriving.

A significant amount of the growth in the industry can be attributed to the rapid adoption of Ecommerce in Asia. The progressive increase in Ecommerce revenue and platform adoption in Asia is at a higher rate than any other part of the world. Further extrapolation shows that Asia will continue to thrive as the principal continent in terms of Ecommerce market revenue, exemplifying the importance of targeting this market in the initial stages of the company. Proper market penetration into Asia solidifies growth, consequently causing a snowball effect; other parts of the world will follow suit accordingly.

The current status quo is sufficient for these businesses to subsist without being threatened by competition, but this is only temporary. These platform companies are well-positioned in the market for factors such as number of clients, ease of use, reputation, and scalability, but there are several aspects that can be improved. None of the aforementioned companies operate on the blockchain, and the user experience is not overly impressive, despite its effectiveness. In addition, the scalability has room for growth and there are no unprecedented technological implementations. For these reasons, combined with the fact that there are very few companies like these in the cryptocurrency market, the progression of this niche moving forward into the future exposes vulnerabilities. 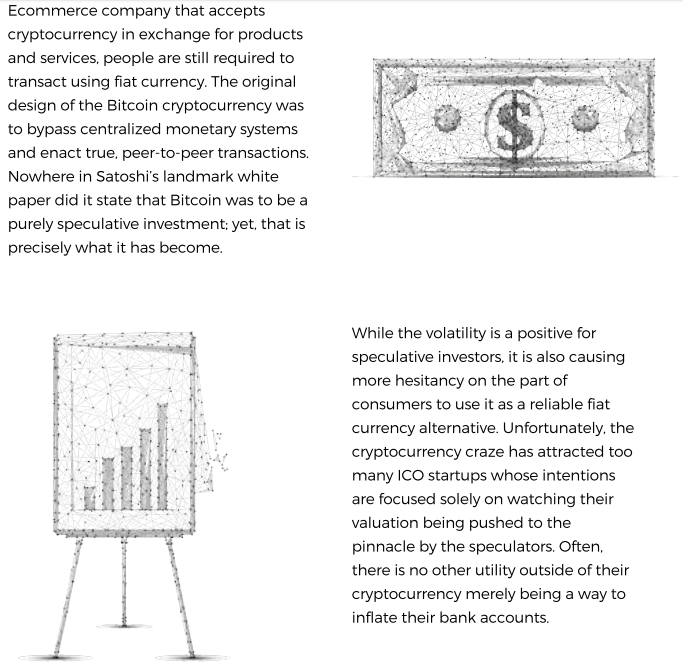 The emergence of blockchain technology is beginning to revolutionize the internet. However, blockchain itself is still in its infancy. Consequently, many businesses in the Ecommerce industry are still unaware of blockchain technology or are content with the current status quo in terms of cybersecurity. The alarming number of data breaches are evidence of this. The ability to store customer data on the blockchain provides a revolutionary new level of security that was nonexistent in years past.

This is a prime example of how the creation of blockchain in its purest form was meant to be used for the real-world application. This immutable ledger serves as the foundation for transactions and storing data that cannot be tampered with. Decentralization prevents the data from being on one single server and openly visible to hackers. This has an immediate effect on overall data security.

The use of smart contracts also provides another element of trust for consumers. The contract that is coded by the developer will store all aspects of the transaction to ensure that the process goes smoothly. The smart contract will be audited to guarantee proper coding. The audit further strengthens the security and legitimacy of the smart contract. The principle is to provide a contract that is not only more secure, but also is set in stone to prevent manipulation and guarantee that a transaction is processed in a proper manner.