Datareum –  a Decentralized Marketplace for Data

Datareum is a decentralized marketplace that will enable individuals to monetize their personal data, selling it directly to market researchers, academic researchers, and other interested parties. Built on the Ethereum public blockchain, Datareum’s platform will facilitate this peer-to-peer transaction of sensitive personal information securely, without the risk of hacking. Using online surveys as a starting point for building the marketplace, Datareum will employ incentive mechanisms that, over the long-term, will ensure the availability of superior quality custom data, providing an indispensable tool for researchers of all kinds.

Operating largely behind the scenes, data brokering is a business that collects and stores personal information about consumers and sells it to organizations who require that data to design their marketing strategies. A 2014 US Federal Trade Commission report identified data brokers as companies that “obtain and share vast amounts of consumer information, typically behind the scenes, without consumer knowledge.”

The data brokers collect this information from a variety of sources such as government records, browser cookies and credit/debit card transactions. Various data types associated with this market include consumer data, commercial data, scientific data, real-estate data and geo-location data. 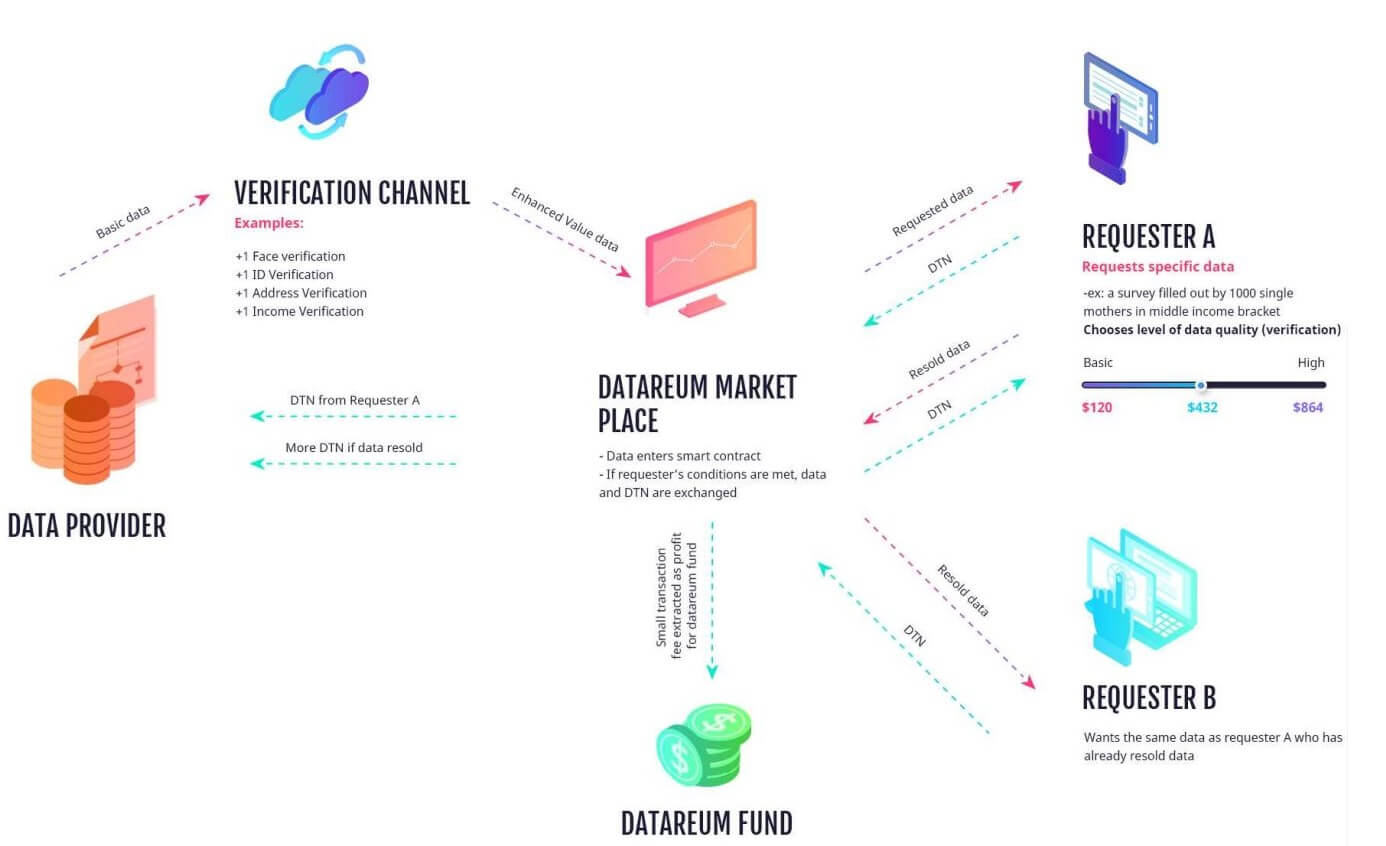 The Value of Data

Actually quantifying the true value of data is not easy because the applications for its use are rapidly evolving. But as an example we can see that in 2016 Microsoft acquired the online professional network LinkedIn for $26.2 billion. Globally, LinkedIn had about 100 million active users per month prior to the acquisition. A simple calculation tells us that Microsoft paid about $260 per monthly active user

To a company seeking profit then, data has significant value. In 2013, analysts predicted that the ROI of investment in Big Data would increase from 50 cents per dollar invested at that time to $3.50 per dollar in three to five years’ time 2. According to McKinsey Research, better use of data analytics by marketers can improve ROI by 10-20%

Size of the Data Broker Market

The data brokerage market, which can be seen as a metric for valuing data as a whole, is estimated to be a $200Bn industry. The market is dominated by large international players such as Axciom, Equifax and Experian that offer the most sophisticated data sets. Equifax is said to hold information on 800 million individuals around the world, generating revenues of $3.1 billion in 2016 . A subsection of data brokerage, the market research industry – which includes players like Neilson and Ipsos – generated $44 billion in revenue in 2015. Focusing specifically on perhaps the fastest growing component of this industry – online market research using surveys – we find $21 billion in annual revenue $2B, conducting approximately 3 million surveys per day 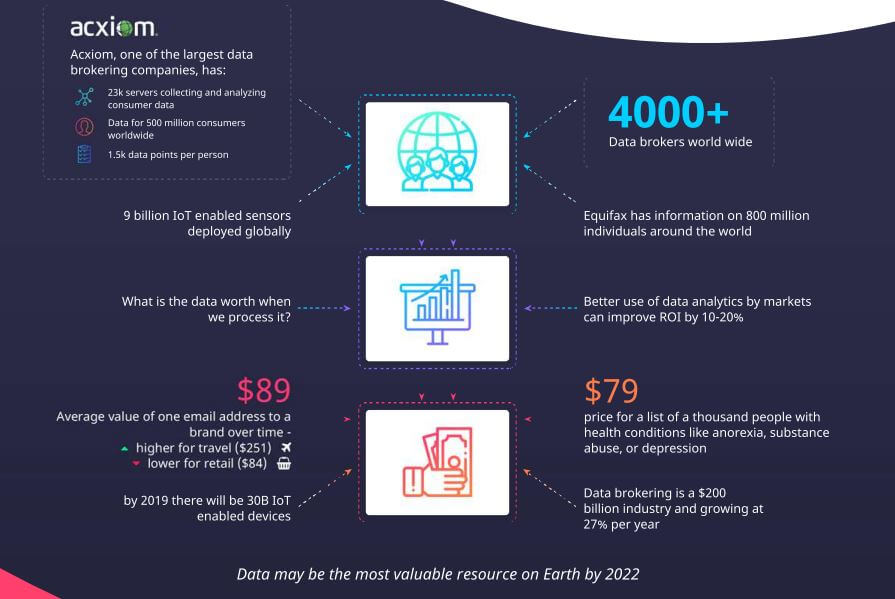 Our personal online data is an economic asset generated by a combination of our basic identity (includes age, location, gender), our behavior (includes interests, attitudes, and opinions), and our purchases. We personally generate this information yet we do not seem to own it, and we certainly do not profit from it directly.

The data broker industry, as we have seen, is a rapidly growing sector that aggregates our data, largely without our knowledge, reselling it for massive profit. 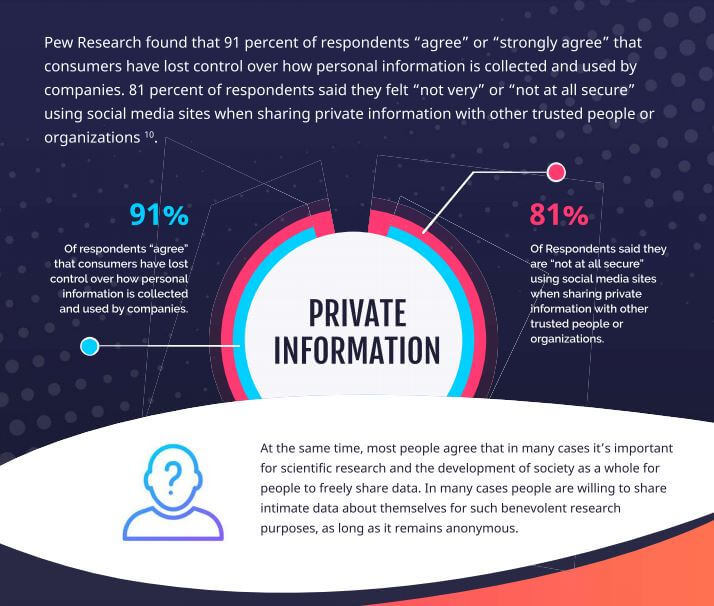 Companies like Facebook and Google already make billions because they know everything about us via our online habits. Most of the information collected by these “data custodians” remains out of reach of both individuals and researchers. This means that we are missing out on the potential value of that data. Beyond strictly monetary value, this data may contribute to the advancement of society itself by giving academic researchers the required information to conduct studies. “Hiding within those mounds of data is knowledge that could change the life of a patient, or change the world” -Atut Butte, Stanford University

There’s even a case to be made that the data we generate may one day be used to make important predictions about ourselves, such as whether we are at risk of heart attack or mental disease. Additionally data custodians typically use the gathered data to attract advertisers but, among advertisers,there is a growing feeling that data custodians should relinquish control over the data generated on the platform considering it’s the advertiser’s products being bought and their ad dollars being spent that enable the data custodian’s platform to function in the first place. 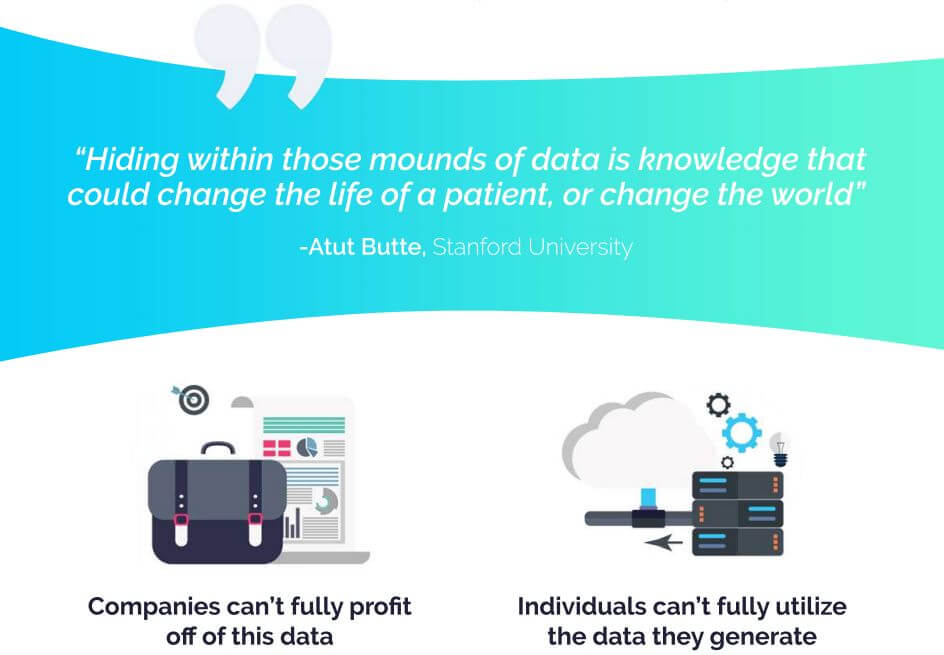 The Equifax hack in September 2017, which allowed attackers to obtain crucial personal identity information for 143 million people, shows that it is unsafe to share consumer information with centralized companies in centralized databases

The potential risks of not being in control of our own data extend well beyond hacking. We also face the possibility of the data custodians purposely using our information in ways that are not beneficial to us. For example, insurance companies use data aggregations to build pricing models for new customers based on perceived willingness of similar customers to pay. Online vendors similarly profile customers based on, for example, whether they are located in the suburbs or the city-center, adjusting displayed prices accordingly. Algorithms using data collected on customers to produce “differential pricing” is now an established but decidedly secretive industry practice.

What if we could own and sell or give away our data directly? In a world where people have full control of their data, a fair and transparent data marketplace can be created. In such an open marketplace, data providers are incentivized to make available – even expressly produce – higher quality data in larger quantities. This has positive implications for research of all kinds.

Data purchasers meanwhile gain access to higher quality data at lower cost due to the elimination of intermediaries. Additionally, since data in such a marketplace is by definition given voluntarily, researchers are assured access to ethically sourced data. Both the quality and quantity of data in such a marketplace, therefore, represents a vast improvement over the status quo. DATA SECURITY The Equifax hack in September 2017, which allowed attackers to obtain crucial personal identity information for 143 million people, shows that it is unsafe to share consumer information with centralized companies in centralized databases.

The rise of the sharing economy has led to an emerging new ethos concerning the nature of ownership. Some call it the decentralization movement as it represents a move away from centralized corporations and government as custodians of information or money, towards decentralized peer-to-peer interactions.

The first key advancement brought by blockchain and its associated technologies is the ability to verify information such as transactions between two parties without needing to rely on a centralized authority. Instead of having to trust a centralized authority, we can now know that transactions have taken place – or not – because they have been agreed upon through a verifiable consensus algorithm. Information, once agreed upon as truth in this manner is then recorded in such a way that it cannot be changed. Blockchain architecture thus ensures the immutability of information recorded in it.

HOW “BLOCKCHAIN” WILL CHANGE THE MARKETPLACE FOR DATA

Blockchain additionally eliminates the security cost of warehousing data by storing it not in a centralized location, but rather in a distributed network. Data stored in such a away becomes practically immune to attack by raising the cost of attack to an amount much higher than the value of the information potentially gained.