Concierge.io (CGE) is a travel booking platform based on the NEO blockchain. The platform itself operates both a centralised front-end allowing suppliers to easily edit their listings, whilst operating a decentralised backend incorporating the NEO blockchain governing the CGE engine. Thus, building a trusted, transparent and secure travel booking platform reducing costs associated with the travel industry.

CGE aims to disrupt the travel industry and provides multiple benefits over potential competitors within the market. A free business model, 0% booking and commission fees for the suppliers with no hidden fees. The incorporation of a peer-to-peer chat function between supplier and consumer along with ability to pay with CGE, other crypto and Fiat-currency payment options. Furthermore, potential competition within the blockchain travel space typically utilising the Ethereum blockchain which operates the proof-of-work protocol. Currently, this does not provide scalability for a travel booking platform [with only 15 Transactions per second]. High transaction costs powered by a mining network contributing to the unsustainable developments of this particular blockchain on both an economic and environmental level. Thus, does not offer many benefits for a real-life use case.

Concierge.io was designed to be a real-world use platform and by utilising the NEO blockchain it allows us to position ourselves above potential competition operating within the crypto space. NEO operating at 1,000 transactions per second with the aim to be running at 100,000 TPS by 2020 [as mentioned in NEO Devcon]. With the current speed of a transaction taking approximately 30 seconds to complete, which is something, a travel booking platform needs to consider competing against market leaders such as booking.com, KAYAK, Expedia.com, Viator or agoda.com. Costs per transaction cost just a drop of gas [less Thant $0.001]. NEO offers an eco-friendly approach by utilising the proof-of-stake protocol. Furthermore, eliminating any associated economical and environment issues associated with other blockchains. NEO consensus offers government compliance which Concierge.io will incorporate once we begin advancements in new and emerging markets and regions across the globe.

CGE token system encourages and supports multiple scenarios such as smart contracts, exchange of data, booking agreement and dispute mechanism. In addition, the CGE infrastructure supports the development and mapping of the dApp and HTML web platform enabling concierge.io to reach the mass consumer within the travel industry. 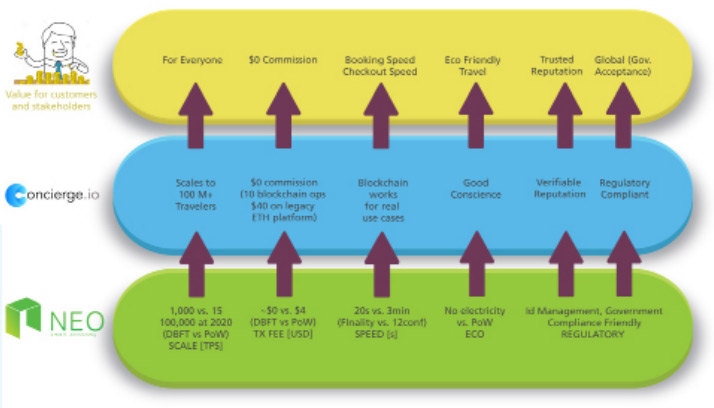 Concierge.io solves the issues stated above by creating an innovative decentralised application and web-platform which utilises the NEO blockchain to bring;
• Speed to transactions incorporating instant transactions between users – Instant transactions over the NEO blockchain 1,000 TPS (Transactions Per Second).
• Safety to booking in case of disputes or discrepancies – we will offer a dispute option within each booking made via Concierge.io platforms. (Evidence of the issue within the booking/service would need to be presented and both parties must respond in due time to come to an agreement about the issue).
• Transparent and accurate reviews (Blockchain doesn’t allow reviews to be manipulated or edited so there’s always honest feedback from genuine customers).
• Peer-To-Peer communication between vendor and consumer (Concierge.io are the first to market within the travel industry utilizing the Peer-To-Peer function).

2017
Founders of concierge meet to confirm ideas around decentralized travel platform. Founders meet with developers and initiate the start of the decentralized application and web platform build. Token is tested and ready for release. White paper has been completed, published and sent out to specific investors, ready for marketing. Whitepaper available in both English and Chinese. Sale website optimised Web platform and application designed around user accessibility. Concierge.io whitepaper release
Quarter 1, 2018
Pre sale initiating continuing to the main-sale over a 2-month period Defining and initial development the back-end structure of the Concierge.io platform UI design and initial development of front-end of application and website platform. Hire vital employees: – Blockchain developers – Front-end developers – Back-end developers – Sales and marketing employees – iOS and android developers & web developers
Quarter 2, 2018
Listing CGE token on exchanges (Approximately 1-month after Main-sale concludes) Integration of platform in line with blockchain including fiat and cryptocurrency payment methods. Peer-to-Peer chat option and amalgamation of AI-based dispute system development Beta testing Release of Concierge.io beta application and web platform Release Hotel bookings on the platform Launch industry promotional activities developing partnership with key hotel and resort chains Further development of platform and releasing V.1 of Concierge.io
Quarter 4, 2018
Research of expansion of Concierge.io into different regions after initially starting in south east Asia and Australia (Regions will be chosen based on estimated speed of adoption) Partnerships with blockchain identity security platforms ensuring privacy with direct chats and within the payment system Release Tour bookings on the platform Press release around the tour options and reach out to key tour providers Release V.2 of the Concierge.io platform updated now offering tour bookings
2019
Partnerships with universities and other educational institutions upholding youth development in forms of internships with yearly positions available within Concierge.io Release property exchanges onto the platform Press release around the property exchanges Release V.3 of the Concierge.io platform updated now offering property exchanges Advancement into other regions such as Europe, North and South America
2020
Research into other areas within travel which Concierge.io could bring benefit to Analysis and research areas of travel available on the Concierge.io platform. (Such as; Taxi bookings, Rent-a-car, Boating charters) Develop augmented reality (AR) and virtual reality (VR) into the system for browsing purposes of consumers Launch in multiple areas within travel (Such as; Taxi bookings, Rent-a-car, Boating charters) – Market analysis will justify which area to enter in what region first.
Tweets by conciergeio
tweets