The BandZ Network was established in mid-2017 with headquarters and Intellectual Property rights held in Toronto, Canada. BandZ is a business focused on decentralizing the internet.

BandZ is a global p2p extranet project with the aim of making internet connections censorship resistant, secure, cheaper, as well as accessible over larger distances and in low infrastructure areas. Blockchain software is being built to provide the services that will be available to BandZ users on its extranet (VPN, rotating proxy, secured communications, mesh networks, and more).

BandZ offers novice users the ability to access these enterprise-grade internet services at a low cost. BandZ will also enable peers to provide these services to each other via the exchange of bandwidth as payment, denominated in the BandZ token. All underpinned by BandZ secure proprietary blockchain technology. 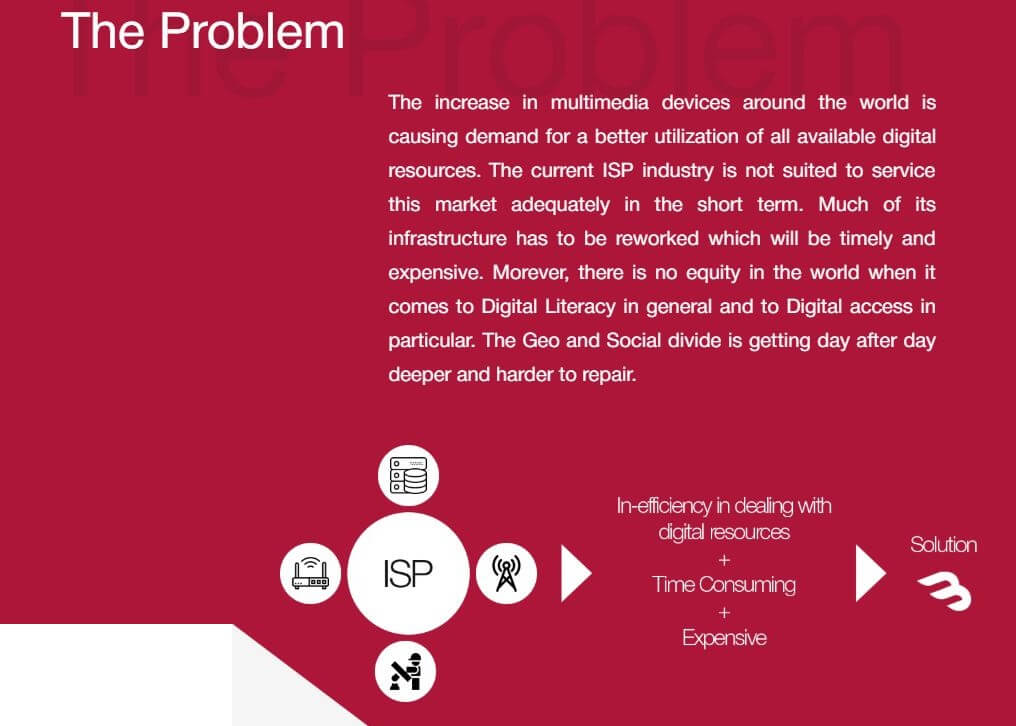 Our vision is to create a robust, super-cheap extranet experience that changes enterprise-grade network infrastructure from a premium purchase to a downloadable, pay-as-you-go app with over ten times the cost savings when compared to the same services available on the market today.

Adopting blockchain technology to develop the monetization of BandZ will enable the network to incentivize rapid user adoption. Additionally, blockchain architecture will improve transparency, security and allow BandZ to make internet access cheaper and geographically agnostic for the end user.

The goal is a global extranet which treats each individual user as their own intranet. If this can be accomplished, then the underdeveloped parts of the world can truly unlock the financial potential of both the internet and the blockchain.

Introduction to the BandZ Network

IP addresses and bandwidth are a valuable commodity with bigger players able to outright own and lease them as property. Ordinary consumers do not have the resources to access this sort of market in any way other than as a customer. The BandZ Network is a decentralized extranet with the aim of transforming the ISP industry from a business into a decentralized global protocol.

The BandZ Network aims to allow providers, which is anyone who has an internet connection on their device, the ability to access and provide enterprise grade software P2P. Recently cloud storage has moved to the blockchain, now too private networking infrastructure services. 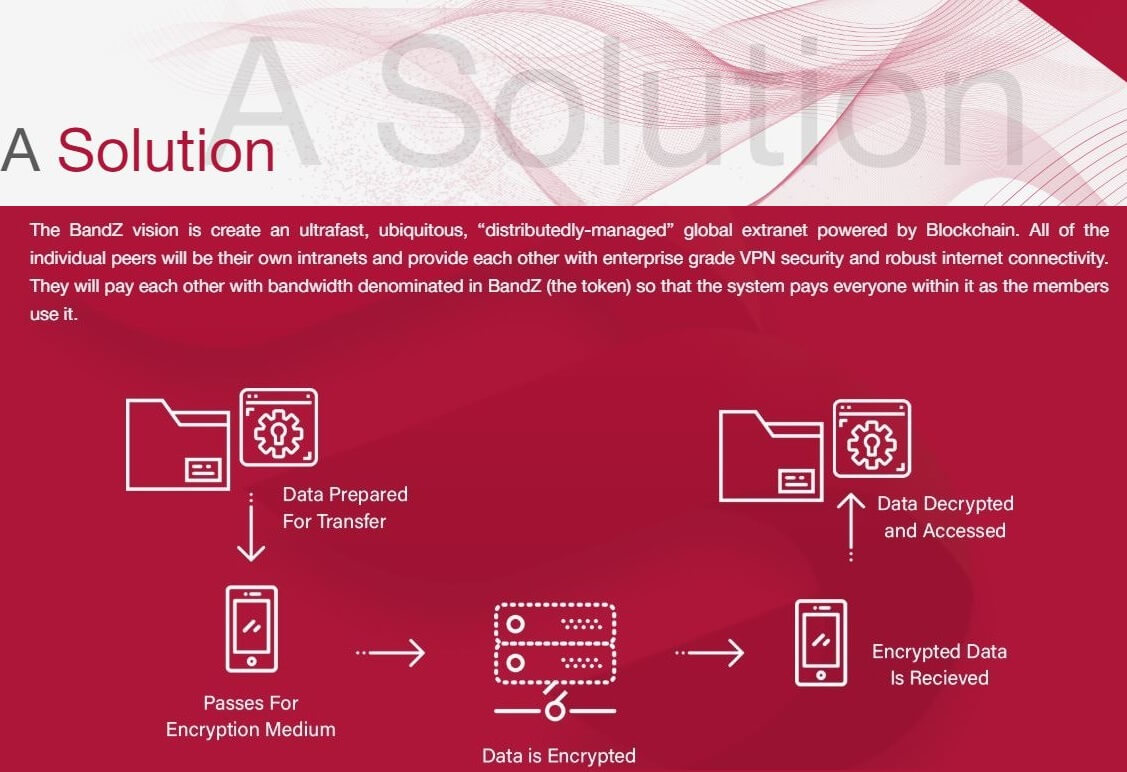 To participate in the network as a provider, one simply needs to run a BandZ node on their device. BandZ nodes will run on windows, mac, linux, ios, android, and arm devices as of now.

One may also integrate their existing app or product with the BandZ Software Development Kit (SDK). The BandZ SDK allows you to monetize your digital assets by running a BandZ node on your user’s behalf. Providers then earn money for every 1MB they forward; BandZ nodes can forward both TCP traffic and UDP.

To participate as a consumer you need to run a BandZ node, or join a BandZ pool. We believe BandZ pools will naturally form for bandwidth buyers, allowing these buyers to enter the BandZ Network without having to run a BandZ node and transact in BandZ at all (this means unsophisticated users can immediately enter the network). Note that using a BandZ pool will expose your traffic to the pool operator as the end to end encryption BandZ provides happens when traffic enters a BandZ node.

As a consumer, connecting to a BandZ node may be done via basic proxy protocols like Socks or HTTP. Otherwise one can forward traffic directly into a BandZ node using IP Tables, traffic shaping rules, kernel hooks or other craft; this allows you to forward things like UDP or SCTP traffic. BandZ does not support nor use the VPN protocol or any other distinguishable protocol.

As a consumer one can choose which provider their traffic exits from based on country, city, whether the IP is a datacenter, residential or LTE/4G/3G/Edge address, and other filters. The marketplace supply and demand will determine the prices for these choices.

We are currently implementing four different blockchain solutions, one alternative consensus algorithm, and finally we shall migrate to our own unique BandZ blockchain.

The four blockchains are Ethereum, HyperLedger, Cardano and Aeternity. We are under a Nondisclosure Agreement regarding the last alternative consensus algorithm, however, we will make all information public when permitted.

Aeternity offers off-chain smart contracts and state channels which will allow for the micro payments BandZ Network requires. We have looked into competing options like the Haskell written Cardano, Raiden Network (on top Ethereum) and more.

Our core focus is to determine which option will yield the best microtransaction speeds for the BandZ Network Protocol. Since bandwidth is a heavily consumed commodity, we anticipate great network traffic.

As you can see a BandZ node is flexible via its many different methods of connectivity. BandZ does not force you to use the VPN protocol to join the BandZ Network, and not does not limit you to socks5 or http proxy options which allow traffic leaks in many apps. 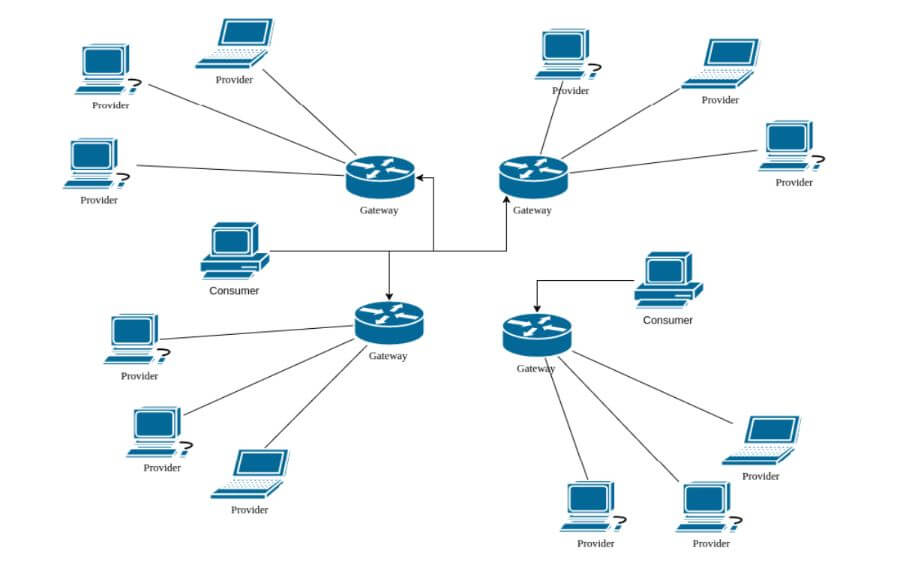 This diagram is a simplification of the different nodes participating in the BanZ Network. Here, consumers of bandwidth spend BandZ to connect, via gateways, to providers.

The BandZ Network will have a fixed supply of tokens, which will be released in stages after the ICO (hence the upward bending supply curve). This will apply deflationary pressures to the value of the currency as the network grows; implying that the quantity of bandwidth it should be able to access will increase over time making the price of the token go up.

We initiated this project on the key assumption that there will be more demand for bandwidth in the future, as has been the case over the previous four years of ISP revenue growth at 8%+ per annum. 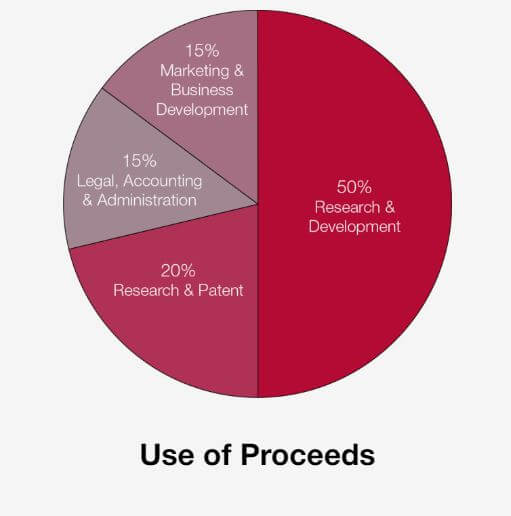 The BandZ Network is offering its potential users the right to pre-purchase BandZ tokens through an ICO pre-sale event that commences July 2018.

BandZ Network ICO will be registered under the laws of the Estonia. It is subject to a market best practice audit in accordance with Estonian regulations thereby ensuring total transparency and absolute accountability of all BandZ Network activities including the publishing of full company statements.

All BandZ tokens will be distributed in direct proportion to the amount paid during the ICO in accordance to Terms and Conditions.