The current Television Ecosystem is broken. TV networks around the world are abusing their market power as gatekeepers to increase prices for advertisers, lower payouts to content creators and drive up subscription costs for consumers. They actively hinder innovation in content delivery and advertising technology in order to sustain their oligopolistic position and benefits. Many consumers are rightfully frustrated with the state of broadcast television. They enjoy the lean-back nature of a fixed program schedule, but would like to see more premium content personalized to their viewing patterns and interests. At the same time, tech giants like Google, Facebook, Amazon and Netflix are looking to build their walled garden around the television ecosystem, eager to acquire more power through data and access to consumers. TV-TWO offers the community a solution in form of an Open Platform for those who are curious cutting the cord. This includes:

First, an application for Connected TVs that blends traditional television with a personalized video stream offering premium content at no subscription costs. The video stream can always be opened with just one click of a button. Second, the Token for Television (TTV), an ERC20 token that administers the exchanged value between consumers, content providers and advertisers. We propose a new ecosystem, where the trustless nature of the Ethereum blockchain makes it possible for market participants to interact directly without having to rely on middlemen. Consumers get to watch curated videos while receiving TTV for choosing to see sponsored messages from advertisers. Content creators are rewarded by users with TTV for their quality productions. The Token for Television will be offered to the community in a crowdsale. We will employ the new and improved standard of the Interactive Coin Offering as proposed by Jason Teutsch and Vitalik Buterin in order to guarantee a fairer and more transparent assignment process. The TTV crowdsale is especially relevant for advertisers that are looking for sponsored reach on the Big Screen. At the same time, investors can profit from the Network Utility Expansion Mechanism inherent to our model. Since no additional coins will be issued after the Interactive Coin Offering and each token has the reserved right to show ads to a fixed portion of the TV-TWO user base, each consumer that comes to the platform boosts the value of the token.

TV-TWO will bring the digital age to millions of living rooms around the world. We o↵er the community:

We aim to establish a direct relationship between consumers, content providers and advertisers (see Figure 1). The individual players are empowered to pursue direct interactions on the blockchain, decentralizing the ecosystem as well as disarming oligopolistic TV networks, broadcast providers and tech giants, as they are actively hindering open innovation. In section A.1, we validate our claim that TV networks are organized as oligopolies. Based on learnings from the programmatic advertising space that is plagued with fraud, limited viewability and brand safety issues, we will leapfrog TV ahead by building transparency right into the core of the model. 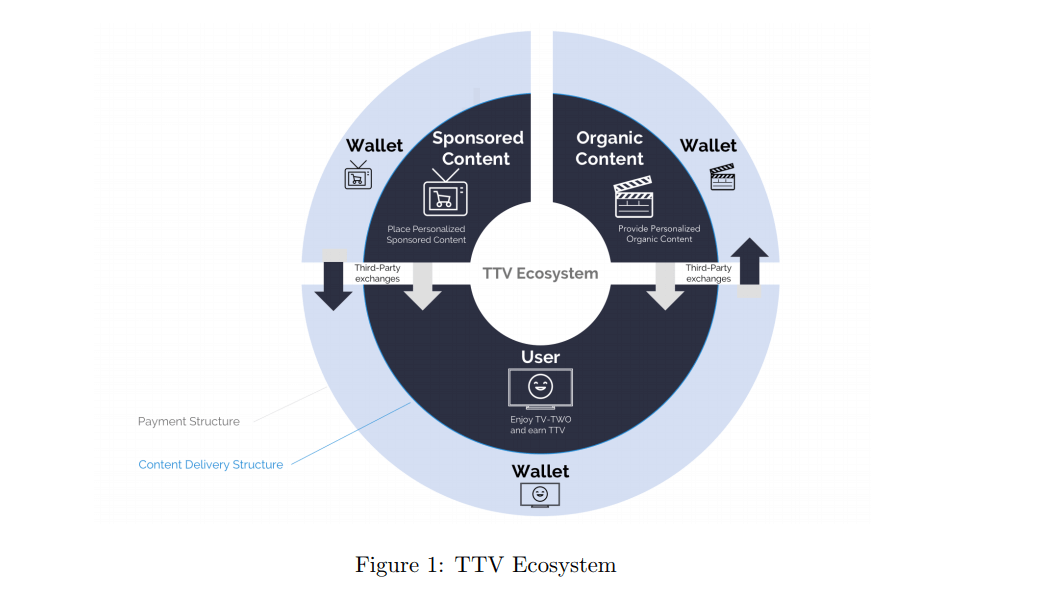 Before the first implementation of the blockchain, an ideal TV ecosystem would have consisted of four parties (see Figure 2). 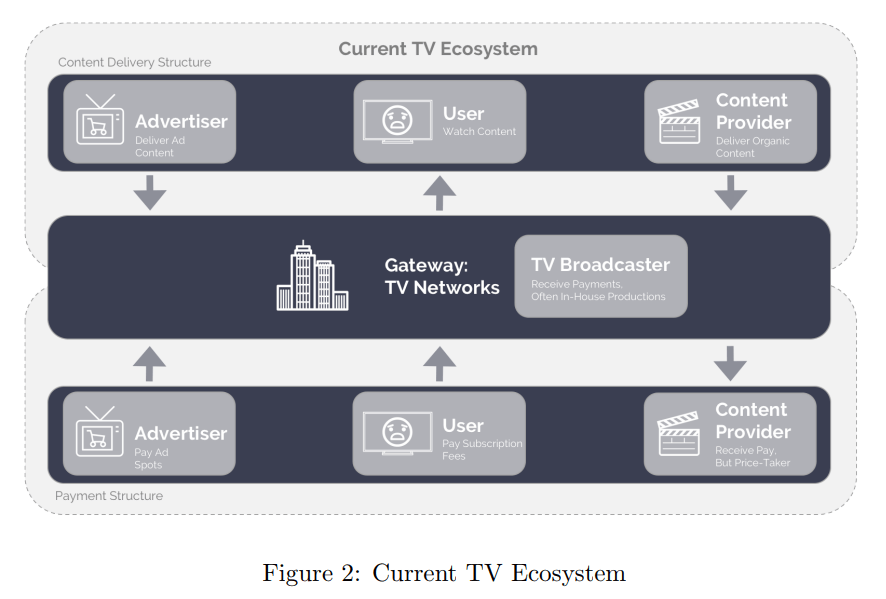 Content providers and advertisers deliver organic and commercial content that is curated by TV networks and transmitted to consumers by broadcast providers that typically belong to the same parent company. However, TV networks are exploiting their gatekeeper status:

Given the status quo, TV networks act as middlemen between three parties that should have direct relationships among each other for a fair and transparent exchange of value. The trustless nature of the blockchain makes it possible for market participants to disintermediate the oligopolistic TV broadcasting industry.

The Center of the Living Room

Overall, television consumption has remained steady in the recent years. While the use of Netflix and other streaming services has exploded – with 50% of US households subscribing to at least one streaming service – they usually act as add-ons to broadcast, not substitutes.[1] Users are still addicted to broadcast television. The consultancy Accenture explains that “most broadcasters have been at the heart of their national cultural life for decades, and audiences have grown up with them in their lives.“

Nielsen’s “Cross-Platform Report“ from 2014 illustrates how the time spent in front of the television increases proportionally with the age of the user.[22] Taking the demographic shift in the western world into account, this will cement the importance of the TV. Especially consumers with a high disposable income are glued to their television sets. The baby boomer generation, meaning users born between 1946 and 1964, control 70% of the disposable income in the US.[23] For this generation, Netflix and YouTube are no alternative. Baby boomers are used to enjoying the lean-back nature of broadcast television, in which they do not actively have to choose the program. A personalized and automatically curated video stream on the Big Screen is the way to go.

On mobile devices, Facebook has perfected the system of an infinite video stream. Nowadays, more and more consumers are watching videos on their smartphones. However, a Yahoo survey finds two major disadvantages, which hinder a seamless video experience on mobile: screen size and battery time were criticized by more than half of the respondents (see Figure 3).[24] Especially, the screen size is an inevitable downside. We as TV-TWO are certain that the television will remain a centerpiece of our living rooms for years to come. This is the place where people gather and look for entertainment. Despite centralized markets, an undemocratic distribution of power, non-transparent reporting and inecient targeting methods, television can currently sustain its position. If the extensive ineciencies are tackled with the right set of new technologies, television will retain its position as the central entertainment hub in the living room and remain the most important marketing channel.

Governing Board of Ethereum (2016)

2017
Company Foundauon Resource Planning Development of The Smart TV Application Development of Smart Contracts for Operations of the Application Development of The Campaign Platform Publication of Whitepaper Start or the Marketing and Bounty Campaign Community Building Adjustments on Community Feedback
Quarter 1, 2018
Token for Television Private Sale Proof of Concept Release of the Campaign Platform Opensource Release of Smart Contracts Announcement of Token Exchanges ICO Application Release for Samsung, LG, Toshiba, TP Vision and Panasonic
Quarter 2, 2018
lntroduction of TTV to the Campaign Platform With Managed Wallets Onboarding of Advertisers on the Campaign Platform Onboarding of Content Providers and Users on the TV-TWO Platform Iteration of the Appﬁcation with Token Gamiﬁcation Partner Expansion with Advertisers and Content Providers Version 2.0 - Reﬁnement of User Interface and User Experience
Quarter 3, 2018
Evaluallng Set-Top Box Manufacturers for Partnerships Growth Hacking for User Base Expansion Development of Application for Sony, Hisense and Sharp Iteration of the Appﬁcation with Social Features Moving Off-Chain Aspects On-Chain Evaluating of TV-TWO Hardware (Open TV or Set-Top Box)
Quarter 4, 2018
Negotiations with Manufacturers for a Pre-Installation of the Application
2019
TV Networks Offer Content Through the Decentralized Ecosystem
Tweets by tvtwocom
tweets