The vast majority of current social networks operate on centralized architecture in which a service is provided to end users in exchange for viewing advertisements on the platform. This exchange forms the foundation of the attention economy.
TTC is a decentralized and token-incentivized social networking protocol for the next generation of social platforms. TTC provides a brand new social experience; the platform is completely decentralized. This gives participating individuals a highly rewarding and dynamic user experience.
With blockchain-based cryptocurrency, TTC will also offer cryptocurrency incentives via a token also named TTC. Social network users are rewarded for generating, distributing and interacting with other users and their content. TTC returns the commercial value in the attention economy to those same users that cultivate the network.
By combining TTC’s token based incentive mechanism together with the distribution of user-enerated, the TTC platform itself is lead by each end user. As the number of end users grows, the platform becomes more valuable, and the commercial value of the TTC token increases.
The first DAPP on the TTC open platform will be tataUFO, a social network service with more than 10 million total users. tataUFO is committed to breaking the conventional bottleneck of social networks, decentralizing content distribution, and returning value to individual users through a blockchain- riven tokenized incentive mechanism. 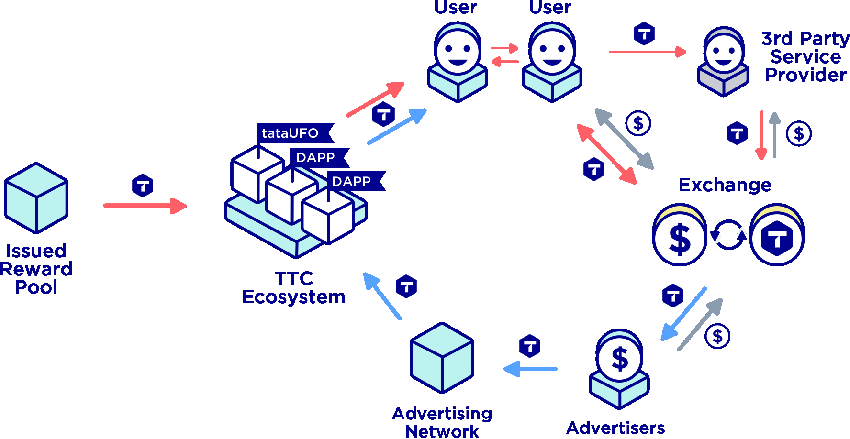 The TTC token (TTC) is a universal token based on blockchain, issued as the operating medium for smart contracts. Compared to traditional mining mechanisms, the TTC token is issued to users depending on their contribution levels to the platform. This incentivizes users to be active in making contributions and maintaining a positive and consistent personal image on the platform.

Advertisers can promote brands and products through the TTC Protocol’s advertising platform. Unlike traditional platforms that are centralized, the profits from advertising go directly to users. This fosters a win-win relationship for both advertisers and users.

tataUFO will be the first DAPP on the open network of TTC Protocol.

As the TTC Protocol grows, other developers can create DAPPs that serve communities outside of tataUFO’s 10 million users. All the DAPPs on the TTC Protocol will deliver economic rewards to end users for their social activities.