Tokenomy is a platform that allows you to easily transform your products into tokens for crowdfunding, loyalty points, donation or other needs. Tokenomy’s aim is to create financial inclusion and provide access to anyone who wants to be connected with alternative funding networks and global innovation.

At TOKENOMY, we plan to build a platform where anyone can help and offer small merchants, entrepreneurs, or even an 18-year-old kid with big ideas a helping hand. We carefully select participants, analyze what they have, what they don’t, and look ahead to their prospects in the future. Knowing there have been troubles in the last few years where people have limited understanding which companies that are truly valuable and worthy of support and which are not, we think it is necessary to build a platform that is truly secure. TOKENOMY was born from the desire to combat fraud, and prevent scams and unreliable organizations from trading with and taking advantage of legitimate companies.

Our goal is not just to become a global token platform for crowdfunding purposes, but to become the biggest existing platform for the tokenization economy. With TOKENOMY, people can invest, business can get needed funding, everyone can trade, and a variety of products and services can be tokenized and become interchangeable across borders without limitation.

ISSUING TOKEN
We will help issue your tokens, by handling all technical aspects and maintaining security. You can focus completely on your product development.

MARKETING
Every token issued will be broadcasted to our huge list of potential investors. You will have a personal webpage where you can publish more details about your token and convert visitors into investors.

TOKEN SALE
Tokens can be bought with BTC, ETH, Waves and TEN. We act as a payment gateway and escrow service to ensure security.

EXCHANGE
All tokens issued in Tokenomy will be guaranteed to be listed in Tokenomy Token Exchange, and are fully tradable with other tokens.

900,000+ MEMBERS
By partnering with Bitcoin.co.id, the biggest digital asset exchange in Southeast Asia, your token will be accessible by 900,000+ potential investors and traders.

EXPERIENCED TEAM
We have 4 years experience managing the biggest cryptocurrency exchange in Southeast Asia and we have achieved exceptional growth in this area. Put our expertise to work for you.

TOKENOMY is your one-stop solution when it comes to purchasing TEN Tokens, as well as issuing your own cryptographic tokens. Our goal is to become a global token platform (“Tokenomy Platform”) with hundreds of tokens listed on our exchange, alongside additional features that can help anyone, from small entrepreneurs, merchants, and retailers to large enterprise businesses and developers, issue their own tokens to conduct fair and reliable crowdfunding. It is intended that these individuals and businesses will be able to raise the funds they need from trusted investors, and be provided with a platform to tokenize various products like loyalty points. People can easily trade loyalty points issued by a business for products and services they need, not only from said business, but from other businesses which have their loyalty points listed on the Tokenomy Platform as well. Tokens are intended to be interchangeable with hundreds of merchants and service providers.

We provide 24/7 support to facilitate your business in generating your own tokens, from handling all technical aspects, maintaining security, providing free publication and marketing, to assisting you on the listing of your tokens on our exchange, and on other exchanges. Collaborating with Bitcoin.co.id (the biggest cryptocurrency exchange in Southeast Asia with more than 900,000 users, we will help you list your tokens on their trading platforms and get expose you to the investors you need. For people interested in trading, major cryptocurrencies and new promising tokens will be tradable on the exchange on the Tokenomy Platform.

WHAT IS THE TEN TOKEN?

The TEN Token is a new form of utility digital asset or token that is built on top of the Tokenomy Platform, more popularly known as TOKENOMY. It has been created to support a better, fairer and more reliant crowdfunding platform that can be used by anyone around the world.

With the TEN Token, small businesses can compete on a global scale and fundraise to run their businesses through the issuance their own tokens on the Tokenomy Platform. Anyone can become investors to support the projects in which they are interested.

Additionally, it is also intended that large companies, merchants, and startups can trade their loyalty points alike on the Tokenomy Platform in the form of their own tokens. It is intended that TEN Tokens are tradable assets, as well as a payment method to make payments easier, faster, and frictionless in a new futuristic world and cashless society. 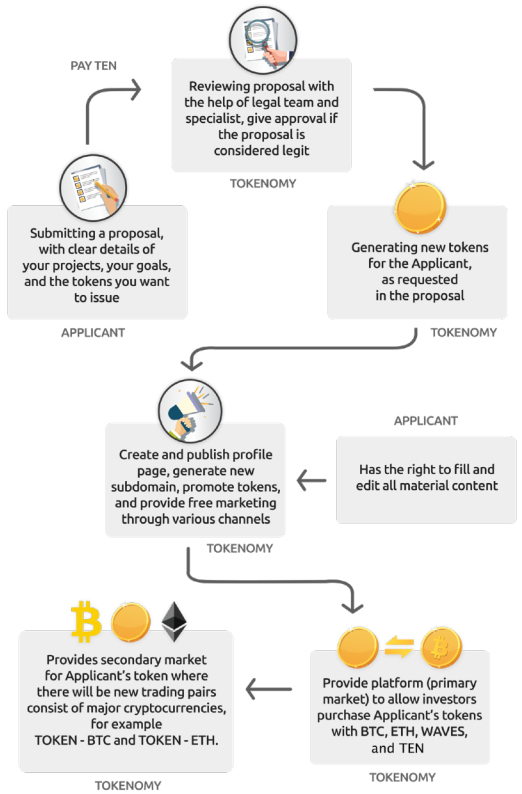 At TOKENOMY, we plan to build a platform where anyone can help and offer small merchants, entrepreneurs, or even an 18-year-old kid with big ideas, a helping hand. We carefully select participants, analyse what they have, what they don’t, and look ahead to their prospects in the future. As people with limited knowledge have had difficulty distinguishing between companies that are truly valuable and worthy of support from those which are not, we think it is necessary to build a platform that is truly secure. The Tokenomy Platform was born from the desire to combat fraud, and prevent scams and unreliable organisations from trading with and taking advantage of legitimate companies.

Our goal is not just to become a global token platform for crowdfunding purposes, but to become the biggest platform for tokenisation. With the Tokenomy Platform, participants will be able to make investments and trade, business will be able to get funding, and a variety of products and services can be tokenised and become interchangeable across borders.

Chief Executive Officer Oscar Darmawan, co-founded Bitcoin.co.id, the biggest bitcoin and blockchain startup in Indonesia. In the past four years, Oscar has been focusing on building the blockchain ecosystem in Indonesia.

Chief Technology Officer He is a professional head engineer who is responsible behind all the technology of Bitcoin.co.id. William has a strong Internet Technology and Project Development background based on his nine years’ experience working in the field.

Chief Marketing Officer Jack Li joined Navis Capital Partners in 2016 where he is responsible for the sourcing and negotiation of proprietary investment opportunities. He is a specialized mid-cap buyout firm with over US$4.5bn in investments.

Fund Manager He is the co-founder and fund manager of a fully regulated cryptocurrency fund domiciled on Cayman Islands, and managed from Singapore under full CMS license of Helvetic Investments. Ville is a frequent speaker on cryptocurrencies in universities.

Business Dev Manager She worked for a financial solution provider company called Banking Strategic Learning for two years before she joined the cryptocurrency field. She became the Business Development Director for the Bitislands Project and did marketing for BitBayar.com.

Communication Manager Skilled to make an essay based on research theories and studies. An enthusiastic self-starter with strong leadership and communication skills. Assisted in developing private company for increasing their awareness.

Technology Advisor He is the founder self-funder of Indonesia’s first tier four data center, DCI; a mentor in Founder Institute Jakarta; and the founder of the 900-man Sigma Group that was acquired by Telkom Indonesia in 2007.

Technology Advisor Izak Jenie is a technology entrepreneur. Izak who made his name in creating one of the first indonesia ewallets. He has also recently seen one of his digital businesses to be listed successfully in Indonesia Stock Exchange, PT M Cash Integrasi Tbk.

International Advisor Backed by 500 Startups, Coinpip is one of the most prominent venture capital firms in Silicon Valley and has been cooperating with Bitcoin.co.id for few years now.

International Advisor Roberto, specialized in Lawful Interception systems and big data analysis, is also a consultant to law enforcement agencies, associate of the NXT Foundation and the first to apply Blockchain technology to supply chain and trade finance.

International Advisor Willson brings in experience in ecosystem building, product/market fit and strategic advice with his investment into hundreds of early stage startups in the region.

Ginting Public Relations Advisor As the founder and chairman of the board of directors of the Indonesia Services Dialogue Council, Yos seeks to accelerate the development of the blockchain-based services sector in Indonesia through the establishment of a coalition of stakeholders.

Strategy Advisor Carlos is a business developer who specializes in the Blockchain Technology since early 2011. His multidisciplinary background includes programming and industrial prototyping.

Product Advisor With a background in finance, he is the Founder and President at Beka Asia Group, an Indonesian business group in construction, technology, and services.

Product Advisor Edy Sulistyo is a serial tech entrepreneur who has founded and exited several startups such as eEvent, OW.com and Kamus.net. He is currently the founder and CEO of LOKÉT (acquired by GO-JEK).

Product Advisor Lawrence is an old-timer in the cryptocurrency mining and trading world, dating back to 2011. His computer science expertise had led him to multiple companies such as Nationwide Financia & Bittorrent, Inc.

2018 Q2
- Token Marketplace will be launched, which is an exchange platform on Tokenomy, allowing users to trade cryptocurrencies - Primary Token Sale Services will be developed which will allow users to launch token sales on Tokenomy
2018 3Q onward
Tokenomy will start on boarding users to the platform
Tweets by TokenomyCom
tweets