One of the largest contributors to climate change is the burning of fossil fuels as a primary source of energy, heat, and transportation. The burning of hydrocarbons released nearly 30 gigatons of carbon dioxide in 2016, as well as toxic and harmful compounds such as mercury, nitrogen oxide, and sulfur dioxide. While investment in renewables has been scaling, the current state of renewable energy production is far from where it should be to mitigate environmental damage caused by traditional greenhouse gas emissions (GHGs). As of 2015, only 10% of global energy consumed came from hydro, solar, and wind sources. The incentives for scaling renewables that are in place today largely reflect legacy ideas, technologies and mechanisms that are inherently flawed. Participants in these programs are frustrated by the fragmentation, fraud, administrative cost, and lack of focus on true environmental impact. More must be done to mitigate the impacts of climate change and empower people to take a more active role in addressing one of the most pressing issues of our time. 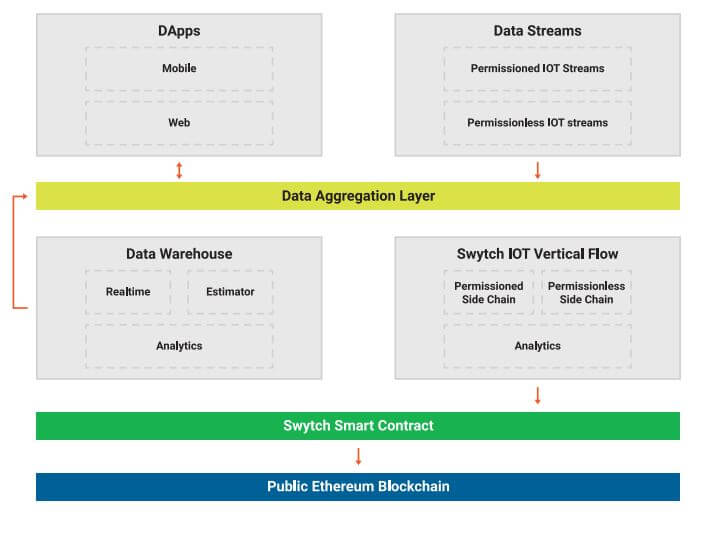 Swytch was born from a collaboration between utility-scale system builders, large energy customers, the energy finance and trading community, as well as cities to address this need with incentive and governance mechanisms that actually work. At its most basic level, Swytch Token will provide an incentive for clean energy producers and fills a gap in today’s market for verified renewable energy data and consumption. Swytch will use open-source applications, protocols, and algorithms to verify and reward investments in renewable resources worldwide. The reward will be in the form of an ERC20 compliant token that aims to incentivize investments in a wide range of renewable and sustainable assets and infrastructure (rooftop solar, distributed utility solar, grid scale solar projects, wind projects, storage systems, etc.).

From large-scale industrial power infrastructure to small residential assets, Swytch Tokens can be generated anywhere electricity is produced. Swytch will provide geo-stamped credentials for production of renewable and sustainable technologies which will serve to create invaluable data sets capturing production information and driving adoption of renewables where future production will have the most impact. Furthermore, the generation and transfer of Swytch Tokens will accelerate investments in and adoption of renewable and sustainable technologies by rewarding production and creating a network in which those rewards can be exchanged.

THE PRIMARY BENEFITS THAT SW YTCH OFFERS OVER EXISTING INCENTIVE PROGRAMS INCLUDE: 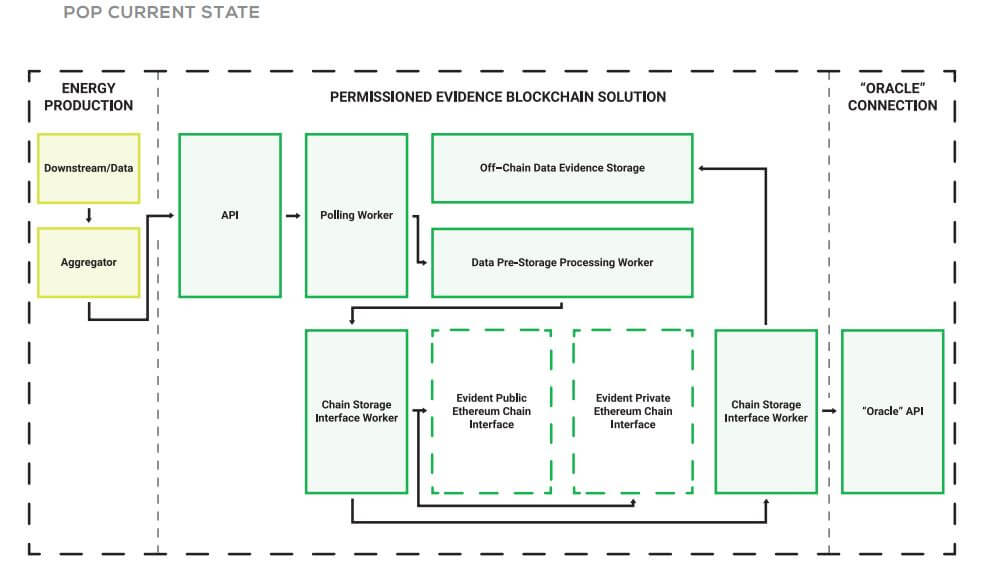 As a result, Swytch will serve as a compelling solution to layer onto existing markets for verified renewable energy production & consumption. Improving upon existing programs will further drive adoption in key segments, including:

To meet these aims, a robust set of solutions has already been developed and tested. Currently, a pilot is being run in Germany with hundreds of assets representing over 1.5Gw of energy capacity. The suite of technologies in place to support the pilot and rollout of the system on Day 1 includes: 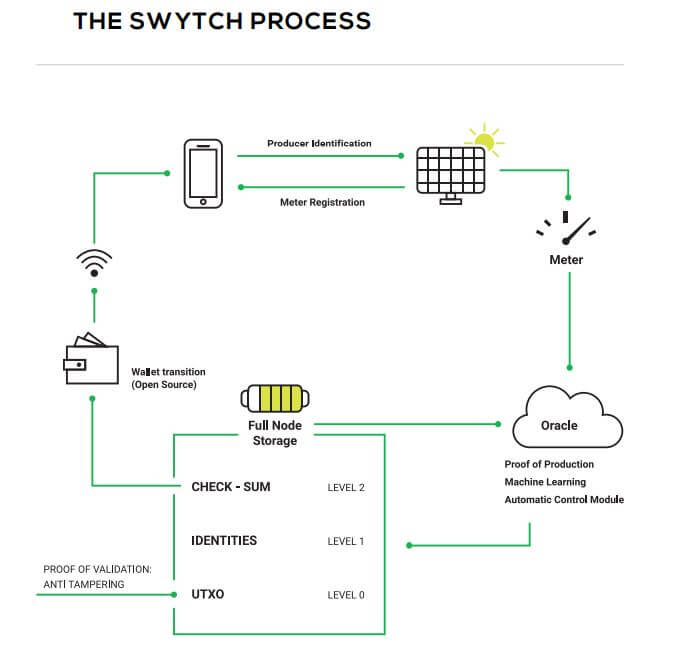 The Swytch team is partnering with organizations and vendors to bring both producers and consumers together within the Swytch network. To date, the lineup of partnerships includes well known players in the energy and infrastructure space as well as well-respected technology firms. This list includes:

The fundamental benefits of blockchain directly apply to many of the issues that plague current incentive systems. Namely, the blockchain allows for process and data integrity and frictionless exchange. A value-based token, when combined with the POP protocol and the “oracle” allocation process and algorithms, enables the following:

Blockchain technologies have been rapidly evolving over the last four years. Ethereum offers enhanced features relative to Bitcoin, and newer technologies have dealt with many of the issues around both Ethereum and Bitcoin with respect to performance, security, privacy, know-your-customer issues, block size, permissions, scalability, and computational power consumption. This trend will likely continue for the next few years. Swytch intends to capitalize on the blockchain’s evolution and improvement without being locked into any one protocol or platform. 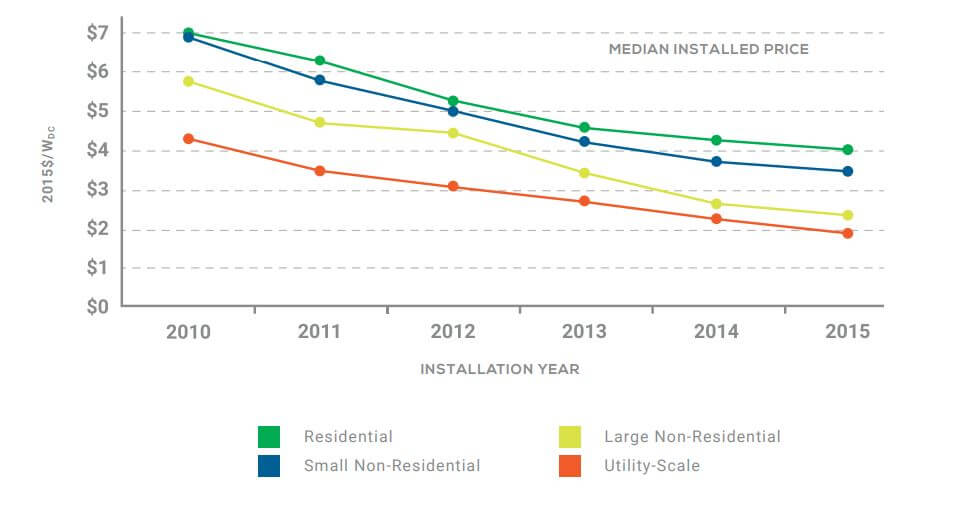 The Swytch ecosystem creates a global vehicle to deploy resources directly into markets where renewables can yield the highest economic and fossil fuel replacement impact. Swytch’s platform design aims to encourage rational investments specifically in areas where carbon emissions are high or power generation is low. Swytch can accomplish this task by leveraging the “oracle”, an open-source dynamic adaptive control module (“DACM”), which allocates the number of tokens to reward participating nodes.

Swytch will leverage open-source blockchain and a Proof of Production consensus to verify investments in renewable resources worldwide. The Swytch platform rewards investments with tokens that are issued through an independently verifiable algorithm that will rely on consortium development and governance, as well as machine learning to build the most optimal allocation methodology.

From large-scale industrial power generation to small residential investments, Swytch Tokens will be minted anywhere renewable electricity is produced and consumed. Swytch will be providing geo and time-stamped credentials for production and consumption of renewable and sustainable technologies. Each Swytch Token used and accepted for commerce will directly support investments in, and accelerate the adoption of, renewable and sustainable technologies.

Director of Compliance and Governance