Selfpay – Bridging the gap between traditional payments and cryptocurrency

Since the advent of the most famous cryptocurrency, Bitcoin, released in 2009, to this day the number of sellers or merchants accepting digital assets is still ridiculously low.

A number of reasons have been offered to explain this, for example, the slow speed of transactions; but real solutions that would help solve this are still to be found.

Recently, a promising blockchain technology, Ethereum, released in 2014, has been bringing faster transactions, addressing one of the main Bitcoin issues.

The possibility to execute code called smart contracts and the recent release of the ERC20 token standard, based on these very contracts, has enabled new concepts to emerge. Some of them involve the possibility to use physical credit cards backed by cryptocurrency accounts, thus enabling customers to effectively pay in cryptocurrency.

That’s a perfectly suitable workaround, but the main problem remains: sellers and merchants still do not accept digital assets as easy as cash or credit cards and both customers and sellers are still paying exorbitant interchange fees to the banks when using credit or debit cards or when withdrawing cash at ATMs. Believing that the main problem for sellers and merchants to accept a cryptocurrency is both change resistance as well as core technology issues, we are proposing an innovative mixed solution with a clear update path to bring sellers to accept any cryptocurrency, anywhere, anytime. 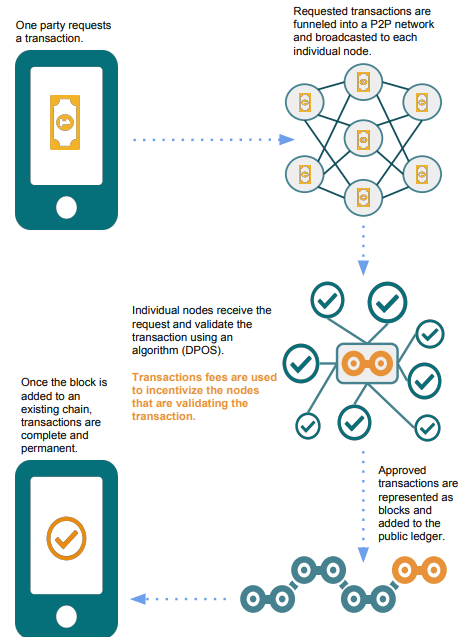 A Point of Sale payment aggregator

SelfPay is a payment aggregator that uses local payment processors in each merchant’s country to provide a unified mobile and Web interface to accept international credit cards and local debit cards. Its unique set of selling values are as follows:

As such, SelfPay is providing solutions covering each use case. From informal offline merchants (Instagram / Facebook, etc.) to small and medium online businesses.

Besides our frictionless payment system, we are incentivizing sellers and/or buyers to use our solution by giving them SxP tokens back equivalent to 20% of the fees of each transaction made using the platform. 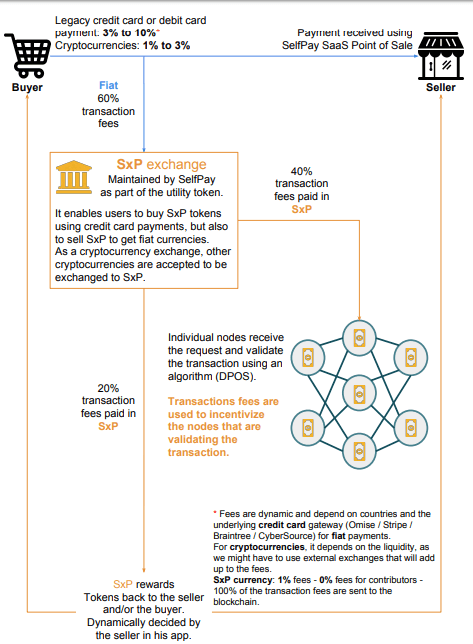 It also allows SelfPay to expand to new regions and territories with great ease. By simply layering new payment gateways on top of SelfPay’s solid foundations, we can grow the portfolio of gateways that SelfPay supports linearly.

As such, the security and PCI compliance are provided by the local e-payment gateway; credit card numbers are never hitting SelfPay’s servers, providing the highest possible security.

Progressive Web Apps, also known as Installable Web Apps or Hybrid Web Apps, are regular Web pages (or Websites) but can appear to the user like traditional applications or (native) mobile applications. This new application type combines features offered by most modern browsers with the benefits of the mobile experience

Instead of trying to force the buyer to use another mobile application or even a wallet application, the buyer’s application is a Web app that does not require any installation.

It is built to be mobile friendly and to use the latest HTML and CSS technologies to provide a responsive and real-time transaction feedback.

It automatically opens when you scan a QR code or when you follow the link sent from the seller via SMS or chat.

Taking the opportunity that, in Asia, the transaction fees are very high and always added on top of the final price, instead of proposing loyalty point to customers that are mostly tourists and will unlikely return, we are sharing those transaction fees with the seller and our ICO backers!

An Existing product
Our product already exists (released in 2016) and is ready to be marketed and spread across South East Asia. We have a clear roadmap to ensure a product market fit at each step (offline seller to online merchants)

A mature team
Our team is balanced, including senior people that are able to manage the growth, but also young talented members to keep the steam going

Applying existing technology
We are building on top of other existing technologies such as using payment aggregators instead of setting up our own payment gateway which is time consuming. We’re leveraging the Ethereum blockchain technology to bring cryptocurrency transaction to small and medium businesses.

The right place
We are targeting South East Asia first – as an Asian based team and company, we know that our product is answering the local payment needs. Typically SelfPay enables the critical step of entering credit card information, to be performed on the buyer’s device, helping to build up the trust that is needed in transactions in Asia.

Business to business (B2B)
Meanwhile most of the projects are targeting Business to Consumer, we are also targeting Business to Business. We want to smooth up the financial transactions between Distributors, Retailers & Wholesalers, using the lower fees proposed by cryptocurrencies but also be able to help by providing credit facilities, powered by other decentralized technologies

Cross-border across S.E.A
Business to Business cross-border payments in Asia happen everyday and leave much to be desired: High fees, not working during week-ends, high local banks fees, etc… It is slowing down the entire ecosystem in Southeast Asia

2016: SELFPAY IS BORN
After 2 man years of development, the first alpha version of SelfPay was released in mid-2016.This version was then iterated upon to work as a payment aggregator, and by the end of 2016, the new version was released incorporating aggregation functionalities and a new design. The release laid the groundwork enabling the product to work as a SasS (Software as a Service) to accept payments via different payment gateways.This version of SelfPay was alpha tested in two Southeast Asian countries using Omise (creator of the OMG token) and CyberSource (the parent organisation of VISA) as payment gateways.
Q1 2017: SELFPAY BEGINS BETA TESTING
Building on top of the existing product, version 2.0 of SelfPay begun a period of beta testing with a few selected trusted testing users.The payment aggregator functionalities became validated. Sellers could man age their own payments both offline and online with self-managed payment gateway keys and their own contracts with their preferred payment gateways.During that time, while the team was investigating new ways of funding SelfPay to maintain its growth, the ICO project began.During Q3 2017, the ICO project was officially launched.
Q2 2018: OFFICIAL PRODUCT RELEASE
Funds raised during the ICO are used to market the product across Southeast Asia. - Ether cash back and SxP retribution process are added to the application. - The SxP token is added to major cryptocurrency exchanges. - Sales teams are set up to market the product in Southeast Asia.
Q3 2018: EXPAND CUSTOMER BASE
- Customers are able to pay using bank accounts as well as credit cards (bank to bank payments). - Customers are able to pay using Alipay, representing 450 million potential Chinese customers. - The inventory used by each seller is used to create a marketplace, enabling offline sellers using our solution to have a new eCommerce channel provided for free. - Integrate SelfPay with remaining eCommerce platforms and shopping cart services (e.g. WordPress, PrestaShop, Magento, Wix, Weebly, Shopify).
Q4 2018: INTEGRATING THE BLOCKCHAIN
We offer the possibility to each seller to exchange their blockchain assets seamlessly from one user to another in a decentralized manner, removing any risks that is usually associated with current centralized solutions.Each seller will be able to send transactions between each other using the SelfPay system, thus providing a B2B solution.Crypto rewards can be received in any major cryptocurrency and ERC20 tokens, enabling sellers to manage a multi-cryptocurrency wallet of rewards.Since fees are taken from the token transacted in, the most popular tokens used accumulate to the distribution contract, helping the value backing SxP tokens.
Q1 2019: SETUP SELFPAY EXCHANGE
Any seller can be paid directly in any cryptocurrency, achieving the original target to bring cryptocurrencies seamlessly to any seller.Internal exchanges setup to optimize the cross-sell between the crypto rewards given to sellers and the rewards withdrawn by the merchants. Local exchanges are still being used to provide liquidity when needed.The product is then being consolidated to integrate other Web 3.0 functionnalities coming from other blockchain projects including OMG, OpenBazaar and weTrust.
Tweets by SelfPayAsia
tweets