Sandblock enables businesses to convert loyalty points, coupons and vouchers into crypto assets, they become tradable and have a real market value! 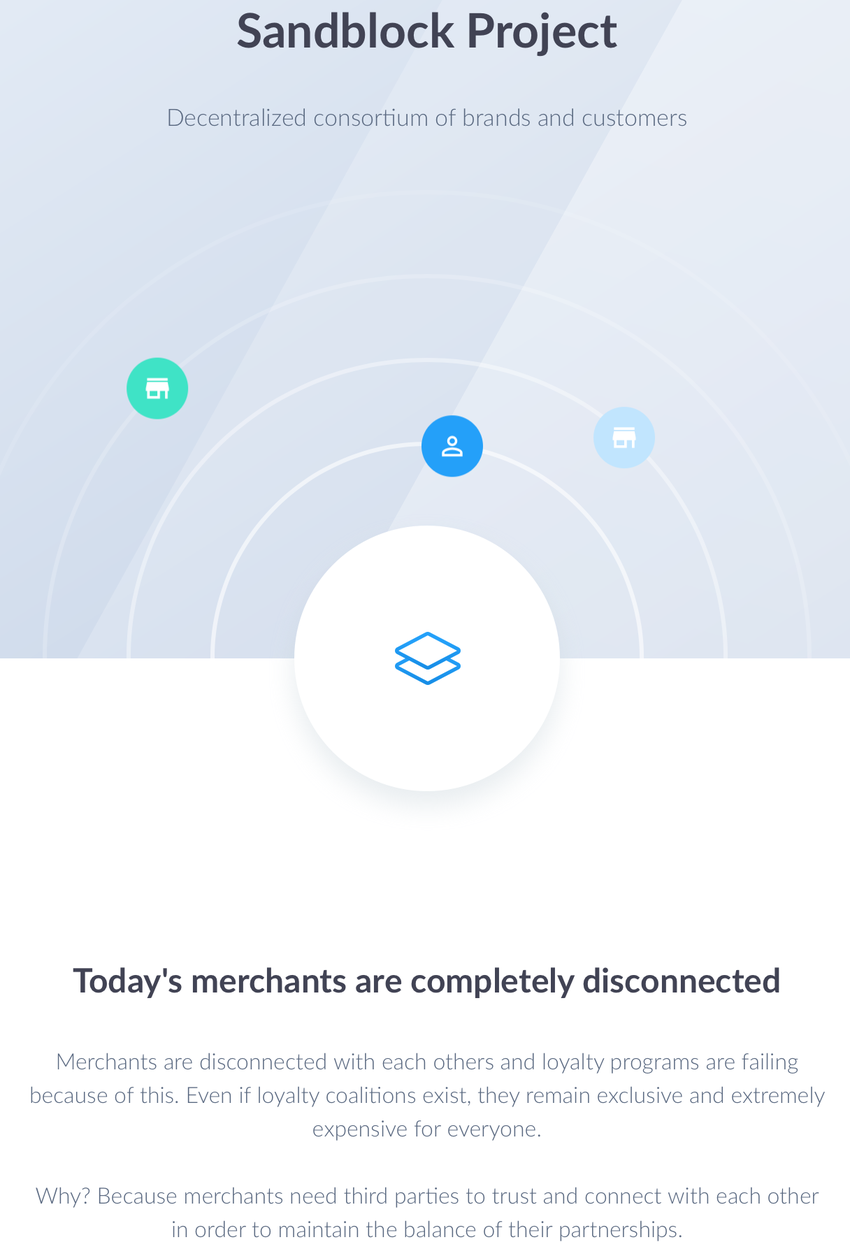 Features of the Sandblock project

Explore the applications being built on top of the Satisfaction protocol. All those applications will be available for everyone within the consortium.

We provide our expertise in blockchain and cryptocurrencies to enable businesses to enjoy the power of the Satisfaction protocol with a classic subscription using fiat currencies.

By subscribing, businesses can implement all the services below in one click and let us purchase Satisfaction tokens, create their Branded tokens and manage it for them.

Eliminating the complexity of the blockchain for businesses which don’t have the technical expertise is a key element in the technology adoption.

Sandblock aims to enable every merchant or brand to reward their customers for their engagement and loyalty using cryptocurrencies and the underlying blockchain technology in a frictionless0 fashion.

The Sandblock ecosystem is composed of a network of merchant partners, their customers and third party actors such as marketing agencies, all connected through a decentralized protocol (the Satisfaction Protocol), the technical aspects of which will be described in details later in this document.

Merchants join the network through a form of partnership by purchasing a certain amount of Satisfaction Tokens (a tradable cryptocurrency that will be created during the Sandblock crowdsale). The ecosystem is designed to incentivize early adoption by merchants, the cost of joining the network of partners will grow overtime as the supply of available Satisfaction Tokens (SAT) diminishes naturally.

In its first phase of development and growth, Sandblock will allocate a portion of the Satisfaction Tokens for early partners adoption (proportional to the amount of SAT purchased by the merchant – the partners token pool is described in the Crowdsale section of this document).

By the time the early adopters pool is fully consumed, the network of partners should have reached a size important enough to move onto a fully decentralized governance where existing partners and predefined Smart Contract based rules are in control of the amount of SAT required to join the network.

Sandblock’s goal is to unify the scattered field of customer satisfaction while enabling merchants to keep their advantage over the competition when they decide to credit a customerfortheir engagement and loyalty (by giving their opinion on their experience for instance). To achieve this, Sandblock enables each merchant partner to create its own cryptocurrency (Branded Tokens) based on the Satisfaction Token. Branded Tokens are deployed and created using Smart Contracts which will describe the set of rules applied by the merchant to reward his customers fortheir engagement.

The Satisfaction protocol is then responsible for the reward computation and autonomous allocation depending on the rules set by the merchant.

All the Branded Tokens are pegged to the SAT and will give the customers the opportunity to either cumulate and use their Branded Tokens to make more purchases to the same merchant orto “withdraw” those tokens and convert them to SAT for other use.

In order to maintain the balance of the network economy, the process of withdrawal – described in details later in this document – uses a part of the converted SATs to refund the merchant and “burns” another part of those SATs.

From a customer’s perspective, going to a merchant partner – a merchant implementing Sandblock’s Satisfaction protocol – is a huge win. Traditional merchantrewards for either filling out a survey or coming back to make another purchase locks the customerinto the merchant business. The customer then has the choice to either purchase more to benefit from the merchant loyalty programs or to lose what they earned. Our approach using cryptocurrencies and the blockchain frees the customerfrom this situation and gives him the opportunity to exchange his Branded Tokens for either another Branded Token orfor SAT which are tradable for other cryptocurrencies.

Sandblock is developing all the required components to connect the whole ecosystem seamlessly. We are currently working, along with the decentralized Satisfaction protocol, on mobile applications (Android and iOS) for customers, a desktop/web dashboard for merchants and other professional actors as well a multiple custom integrations on payment terminals and e-commerce widget/plugins to make merchant integration as easy as possible.