Safekeet – safe deposit box for everyone

Based on blockchain technology, encrypted and entirely decentralized, SAFEKEET is the most secure space storage, and you are the only one that can access it! Thanks to Artificial Intelligence and optical character recognition, SAFEKEET automatically sorts your documents.

Based on the blockchain technology, Safekeet is a smart digital safe deposit box that combines speed, safety, privacy, accessibility and organization.

The power of the tool is enabled by the implementation of an artificial intelligence (that sorts and classifies your documents like a switchman would do at a train station) and the blockchain technology by cutting / duplicating your files to store them on the hard drive of thousands of people offers the fastest, cheapest and safest solution.

The ability for the organizations we are involved with to store their data is clearly what’s at stake here. Indeed, how many times we must face a never ending search among documents during the day, for whatever reason?

For companies, digital transformation takes a bigger part of the work life everyday, and they are going forward into dematerialization to make their document exchange easier along with midterm storage and electronic documents archiving.

Information exchanges’ dematerialization for companies, civil services, local/regional government is a must do and a virtuous trend these days. We are the witnesses of an exponential growth of reliable electronic archiving needs.

Law , which is an heavily document producer and consumer in its daily functioning, stands out today as one of the best development leverage for digital document archiving. 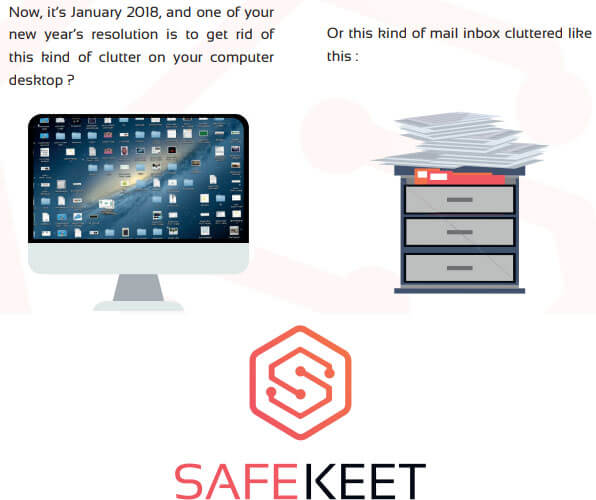 This safe sorts differents documents (service bills, paybills, ID, scanned documents, etc.), archives them and share them if you want to in a secure way.

Thanks to blockchain technology, documents are encrypted, divided into multiple parts and allocated on multiple hard disk drives belonging to people who want to rent their free space.

A PERSONAL AND UNIQUE SPACE

Much more than a simple storage space service, SafeKeet has been created to be like a “personal assistant” to manage all of your documents, legal ones, precious and personal ones.

Rent bills, paybills, service bills, bank statements, certificates, etc. : the digital copy of all your files are just one click away on your computer, smartphone or tablet. There is no more need to scavenge into your paper archive folders for each formality.

How does it work ? 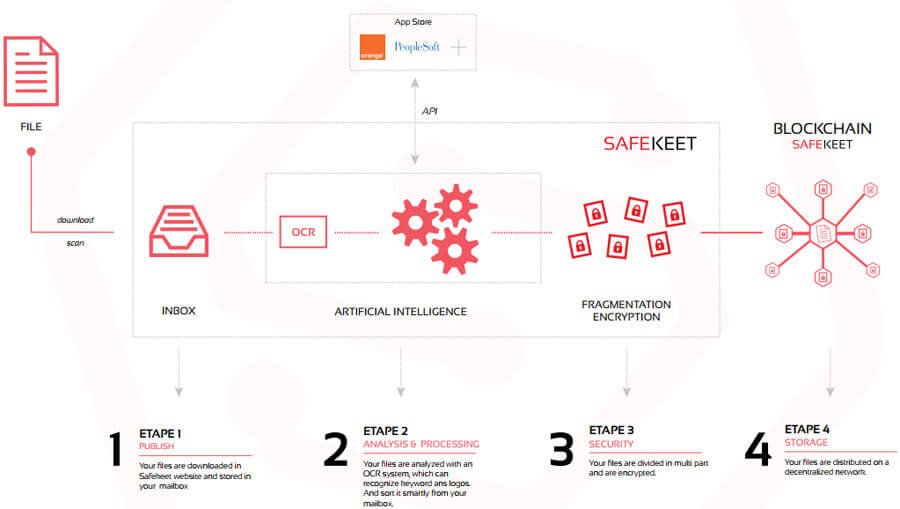 Data centers are the hub of cloud storage capabilities for cloud giants like AWS, Microsoft Azure, and Dropbox.

But, these data centers come with a high price tag for cloud developers, providers, and users. Moreover, they come with an even higher cost of data failures and security breaches.

From networking equipment and physical servers to other infrastructure demands like electricity, cloud service providers are spending billions of dollars every quarter just to maintain or grow their service offerings.

The blockchain is revolutionizing cloud storage by putting the user back in control over their data and devices. The decentralized aspect of blockchain means that there are no central servers to be compromised, and because of the use of client-side encryption, only the end users have complete access to their un-encrypted files and encryption keys.

For example, backup and storage specialists have proved that stored data has not been tampered with, when an effective and verifiable backup was created. Distributed cloud storage based on blockchain technology stores only hashes of its data blocks. And the encrypted and distributed hashes are enough to verify these data blocks.

Blockchain does not just store data in a distributed and encrypted form, but also provides for a sequential chain in which every block contains a cryptographic hash of the block. This links the blocks and thereby, creates a decentralized transaction ledger.

For many cloud experts, the biggest change that blockchains are likely to bring is disintermediation.

This is because a well-designed and publicly accessible blockchain can replace many of the functions that we currently rely on cloud intermediaries for providing a trustworthy trading environment, guarding against fraud and handling, ensuring contract compliance, and financial transactions.

Blockchain’s power does not lie in its heavy encryption; its distribution across a chain of computers also makes blockchain harder to attack. Blockchain is a self-verifying sequential storage scheme that can be used to immutably record transactions, ownership or identity, to negotiate and enforce contracts and much more.

Your files are divided, encrypted and distributed on a decentralized network. Unlike classical cloud storage providers, you have the entire control over your data since you are the only one to have the keys to it.

Decentralized cloud storage is around 10 times cheaper that classical cloud storage providers price tag. Indeed, hosts are all in competition and put forward offers that leads to lowest prices possible.

Your files are stored, divided into a lot of pieces on hundreds of nodes all over the world. This exclude any unique fail point and guarantees maximum availability level, like other cloud storage providers.