By bringing together the cutting-edge technologies of IoT1 and blockchain, and our extensive experience in crop cultivation we are serving an agriculture (“Ag”) ecosystem focused on highly technologized crop growing, processing, and distribution. We bring the high efficiency of IoT and transparency of blockchain into every stage of the entire lifecycle of agricultural business sectors.

The Pavo team has vast experience building traditional monitoring systems for almonds, hazelnuts and walnuts for the European market. Our present IoT solution for agriculture was developed in early 2017 and deployed later in the same year. This year, we’re launching the Pavo cryptocurrency based on the blockchain Ethereum ERC20 standard as the next step in developing the project. 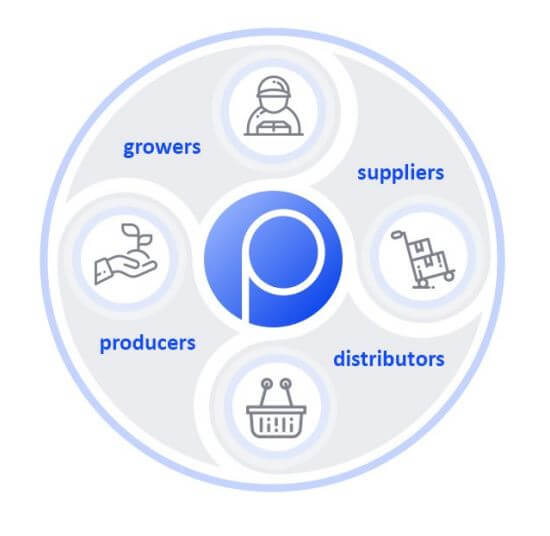 Our ultimate target is the trillion-dollar U.S. food and agriculture industry (roughly 6% of the GDP). American farm outputs alone total roughly 1% of the GDP, or over $130 billion.2 Corn, wheat and soybeans routinely top the rankings of U.S. production numbers, and California — which produces over 80% of the world’s almonds , and some $6 billion worth of grapes annually — is the largest agricultural state in the country. (Globally, food and agribusiness comprise a $5 trillion industry, accounting for one-third of global GDP.

We are spearheading our efforts to further develop and mature our product in the tree nuts (e.g. almonds, walnuts, hazelnuts, pistachios) industry, where blockchain-enabled transparency, and the Pavo IoT platform, is most needed to establish provenance for consumers and build trust. Blockchain has a significant role to play in agriculture, where application of the technology is about food safety, provenance and financial services. Today is the age of transparency and provenance for our food, and, increasingly, consumer purchases, particularly for food, reflect their values.

Using the turn-key Pavo platform, every agribusiness professional will benefit from our IoT and blockchain capabilities with minimal expense, special expertise or major disruption to their day-to-day operations. Pavo brings a fresh, new, approach to an industry that is old, but crucial for humanity and its survival.

As the Pavo solution fully matures, we will gradually tackle adjacent sectors, such as indoor farming, and then move to expand market penetration throughout the entire agriculture ecosystem.

Globally, food and agriculture represent a $5 trillion industry, which only gets bigger with population growth. Some forecasts call for the total, global, caloric demand to increase by 70 percent by 2050, when there will be a projected 9.6 billion people on the planet, and crop demand for human consumption and animal feed will increase by at least 100 percent.

The smart agriculture market alone is projected to grow from $5.18 billion in 2016 to $11.23 billion by 2022, at a compound annual growth rate of 13.27% between 2017 and 2022. The global indoor farming market is projected to grow at a compound annual growth rate of 22.4% and reach $9.9 billion in 2025. In the United States, consumers spend more than $122 billion annually on fresh fruit and vegetables. Our project has a play in each of these three arenas.

Agriculture supply chain participants are increasingly looking to technology solutions such as cloud computing, Internet of Things (IoT) networks and electronic sensors to ensure that their operations are both financially and environmentally sustainable, with growing consumer brand appeal.

Increased global caloric demand is placing new strains on agriculture. For example, by 2030, according to a United Nations report, some 40 percent of water demand may not be met.11 To better manage vital resources, farms are seeking out new ways to collect and analyze data on crop yields, soil profiles, weather and climate.

Therefore, it is only natural that the agriculture industry is turning to technology to alleviate these burdens. As the agricultural industry experiences unprecedented challenges to feed the planet, fueled by population growth and caloric demand, farmers need to prepare for new regulations and increased competition to win over increasingly sophisticated consumers.

Unlike many technology companies that have issued private digital currencies (a.k.a. a cryptocurrency), Pavo already has a working product that is in deployment with customer prospects in multiple farm sites. 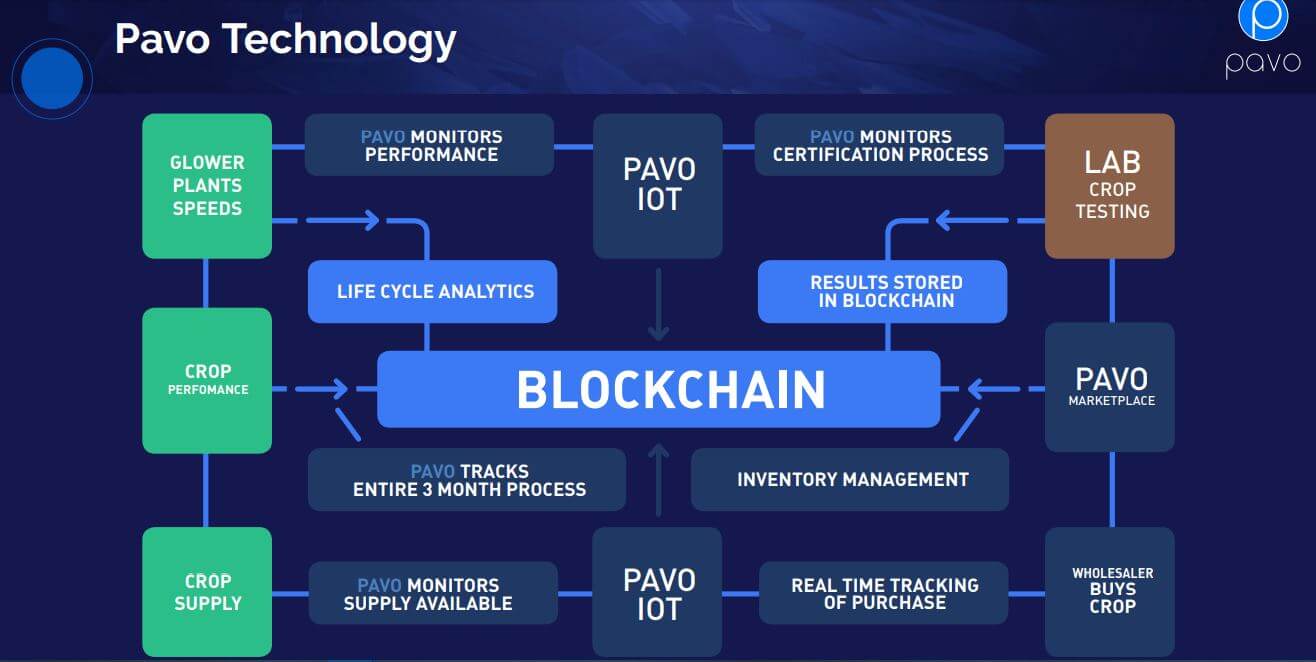 Implementing blockchain will provide increased product transparency for crops from seed through harvest to consumption. Proceeds from Pavo’s coin issue will be used to accelerate continued product and market development.

It’s worth repeating: Pavo already has a working Internet of Things software platform that is in deployment in real-world environments in California, USA. We are continuously refining it to achieve the best crop performance while integrating with the blockchain to transform the solution into a unified ecosystem that makes it easy to trace each plant and optimize the entire supply chain.

The Pavo project is anchored in two major blockchain-enabled components that meet the needs of agriculture:

The Pavo marketplace will be a central hub, powered by IoT and blockchain data, for our token economy.

Marketplace participants use the Pavo token to buy and sell agricultural crops, data and ancillary supplies. 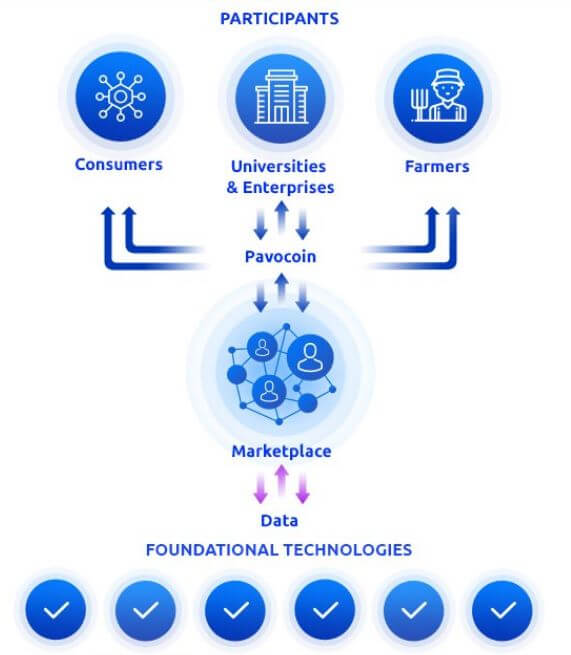