MyDFS is a blockchain-based daily fantasy sports solution that connects sports fans around the world with a transparent, easy-to-use, investorfriendly platform.

The online fantasy sports industry has experienced stable growth every year, topping more than $7 billion of annual revenue, generated by more than 59 million users in the US and Canada in 2017 alone. It’s not just user base that grows, but also their spend on fantasy league-related costs, single-player challenge games, and league-related materials. For example, the average fantasy player spent approximately $556 on his or her sport in 2017.

At the same time, fantasy faces a multitude of challenges that can only be overcome by changing the industry itself. There are uncertain legal statuses, high marketing budgets, complicated user verifications, money withdrawal problems, and complex interfaces, just to start. The market is mainly split between two main players who pioneered the industry, DraftKings and FanDuel. Investors were surely appreciative when they did it, but these companies now have serious problems that include badly balanced marketing budgets, little external competition, a number of monopoly scandals, and the inability to challenge the tough laws and regulations that control the business of fantasy sports.

MyDFS doesn’t try to compete with industry leaders, but redefines the industry itself. ­ 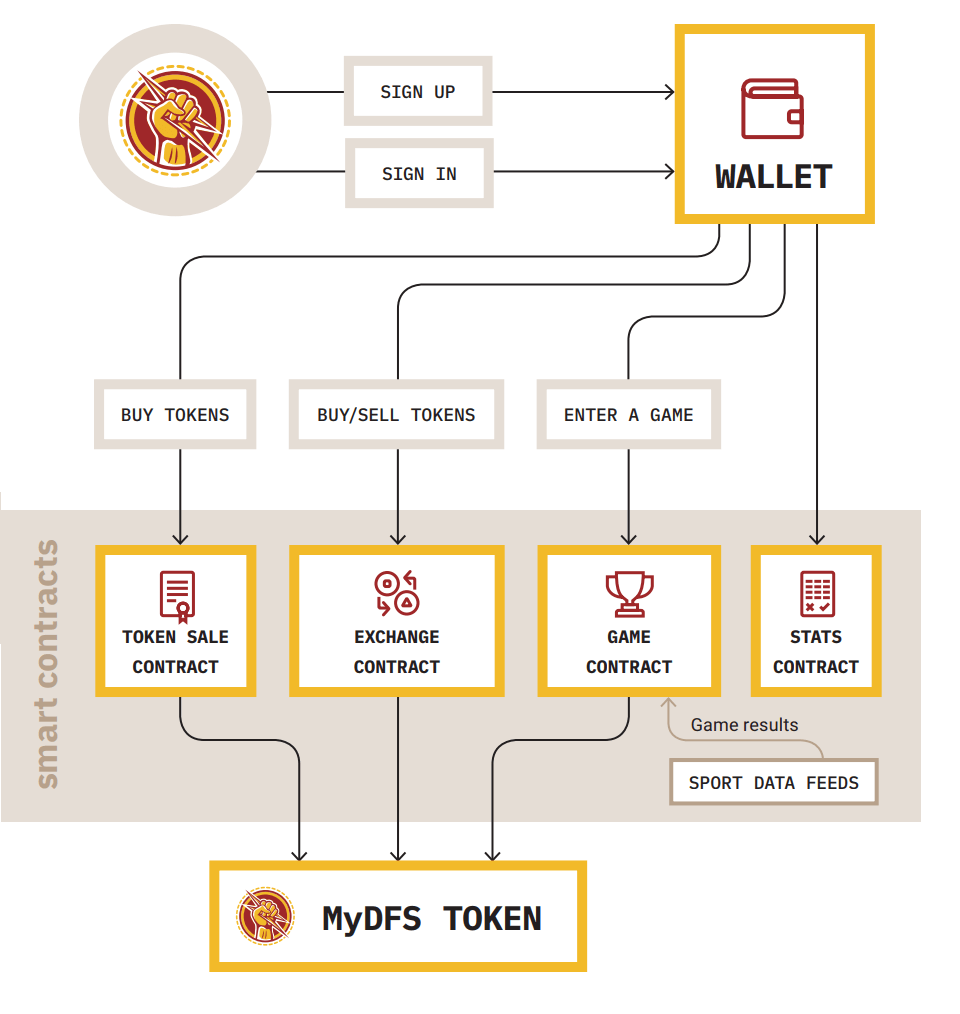 Fantasy sports is a very rapidly growing part of the electronic sports and entertainment market. It grew almost five times in one decade. Starting with 12.6 million players in 2005, it approached 60 million in 2017, and that’s just in the US and Canada.

As of June 2017, the fantasy sports industry’s market capitalization was more than $7 billion, with an average spending of $556 per player per year2. The market in the US is dominated by two main competitors, FanDuel and DraftKings, which share almost 90% of the entire market, followed by smaller players like Yahoo Fantasy. The market is way less saturated for Europe and other parts of the world because FanDuel and DraftKings are just starting their expansion. There is no real front-runner among other companies like Oulala, or a number of fantasy sports platforms run by major newspapers and sport leagues (Premier League Fantasy, Daily Mail Online Fantasy Football, and so on).

Modern fantasy sports are dominated by daily fantasy — a game that sees users play a shortened, highly accelerated version of the game that might last from a day or two to one week. Since it doesn’t require much time to play, it brings more players in and they get their results almost instantly. Another noticeable trend is that most players are starting to use mobile apps to play fantasy sports, not their desktop computers. Even if the market is quite competitive, the major offerings have old, complicated apps that aren’t easy to get acquainted with, and are hard for a new player to master. 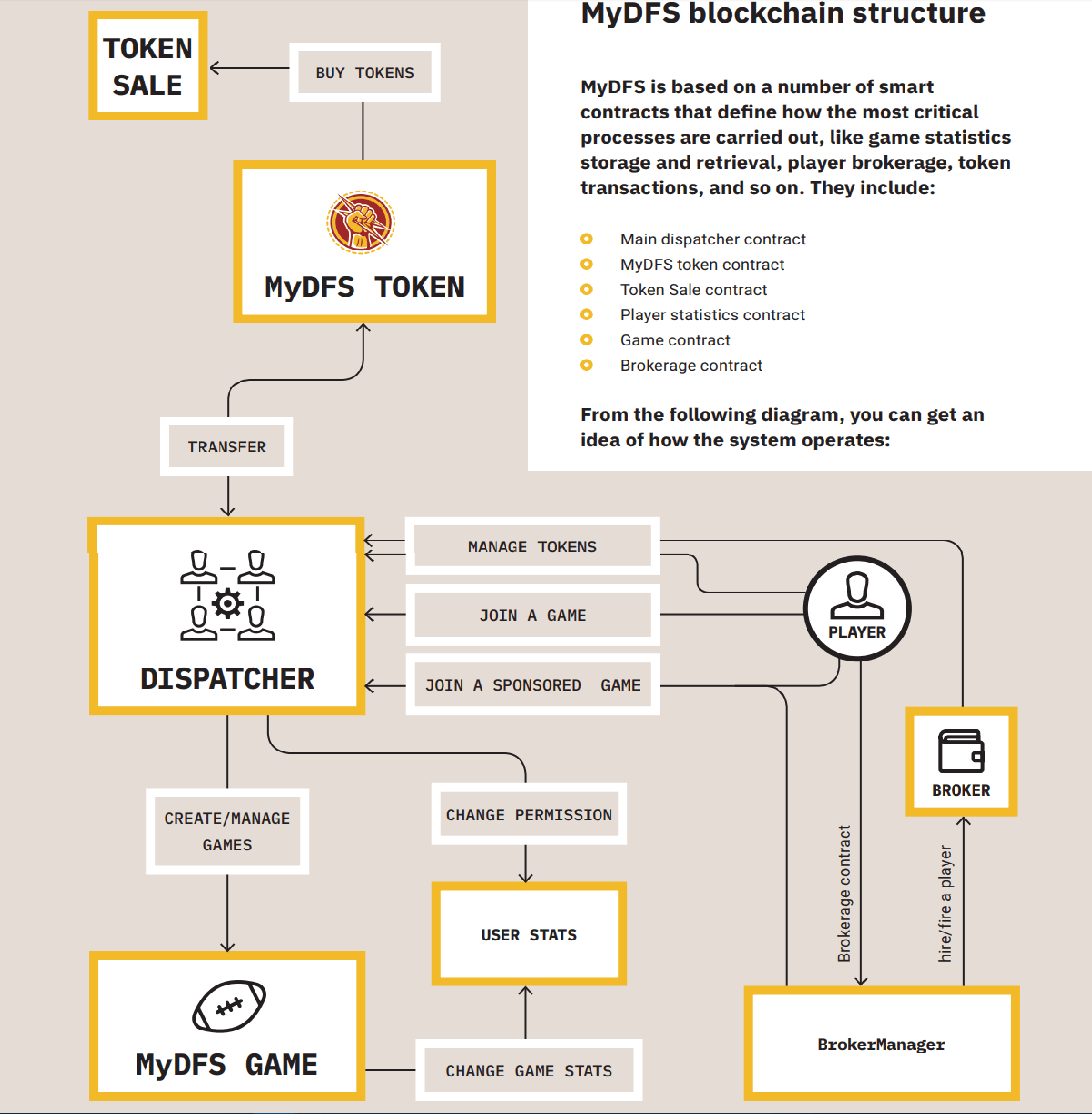 The platform as a whole, including the mobile app, backend services, smart contracts, and so on.

Users sign up with their existing Ethereum wallets, which we’ll link their game tokens to via QRcode, or by entering the address of their wallet, and then going through the wallet authentication procedure. The sign-in process stores authentication data locally so users don’t have to repeat the procedure every time they open the app.

This is a ERC-20-compatible Ethereum wallet that can hold user tokens and move them throughout the app. The tokens available to the user are stored in a smart contract.

Users can buy and sell their tokens using the app, which connects to Token Sale and Exchange smart contracts that store token data and transaction histories.

A smart contract that lets users buy tokens during the pre-sale and sale periods.

A smart contract that records user statistics. It can be used by every member of the blockchain to validate all transactions. It’s also used by other smart contracts, like a game contract, to get or store the data needed to calculate game results. Additionally, a brokerage contract can use the statistics to help brokers choose the right player to invest in, and monitor their performance.

A smart contract that records game data, player lineups, all in-game actions, and calculates the results of the game.

Outlined in chapter 4.3, third-party providers build data feeds that enable this platform to work. These feeds contain the real data from games held by major sport leagues, and we use it to calculate a virtual team’s in-game performance. MyDFS token An Ethereum-based token we use for any value transactions on our system. 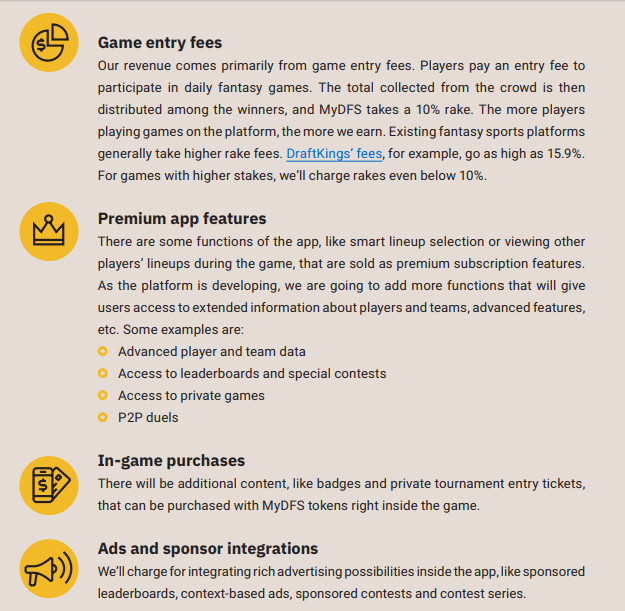