MediChain is a medical big-data platform. It allows patients to store their own data in a secure way and give access to specialists anywhere regardless of the payer network or EMR (Electronic Medical Record) used. 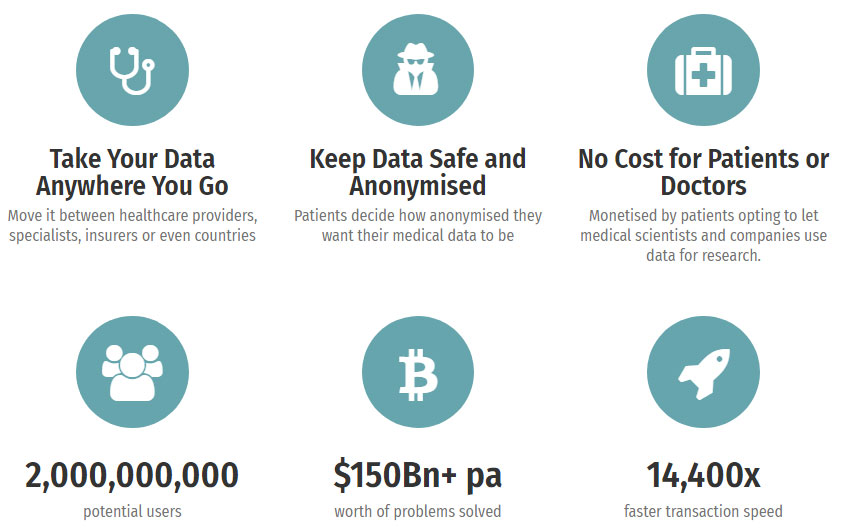 MediChain is a distributed ledger for patient’s medical data. It allows patients to store their own data offchain in an appropriate geographic domain, and give access to doctors and specialists anywhere regardless of the payer network or EMR used.

Patients, doctors and hospitals put data into compliant cloud which becomes part of the MediChain ecosystem and the blockchain stores pointers and rules on usage and anonymity while the data itself is stored offchain in a compliant cloud.

Patients can access their data at any time and allow other doctors and hospitals to access selected parts of the data transcending individual electronic medical records systems.
Researchers and Pharmaceutical companies can access the data as big data in fully anonymised form. It is monetized by the ability to voluntarily give anonymised access to untampered data to pharmaceutical companies, researchers and insurers. Potentially it may also be used for prescription management.

Its unique architecture allows fast access and small downloads to make it practical for everyday medical use. The protocol based on smart cards (optional), Homomorphic encrypted access rules tables, json data formats, lightweight and strong cryptography and blockchain technology, which brings enhanced transparency and reliability in medical data exchange at every level from devices to EMR to unprecedented opportunities for privatised big data sharing.

The protocol enables connections between patients, service providers and medical researchers located anywhere in the world, regardless of systems used so long as the systems can work with the almost universal and open json format.

By improving patient data sharing and availability, and being open to add to any existing system or be managed automatically or by doctor or by patient MediChain aims to allow better conditions for all parties, creating a better way of handling patient data than anything available today.

By including different levels of access in rules MediChain seeks to neutralize the patient’s risk and increase their benefits.

What are the Tokens?

MediChain Utility Tokens (MCU) represent the value of arbitrary patient data blocks. MCU Utility tokens can be purchased via the platform or an exchange. A rule of thumb is that initially that the data from each consultation is arbitrarily given a value in MCUs equal to buyer cost of the consultation in US dollars . Over time this value is adjusted for token availability, different data types, diseases, patient demographics etc to reflect the buyer’s market. Data is available (subject to rules and anonymization) through one or more marketplaces to buyers.

How the Tokens are Used 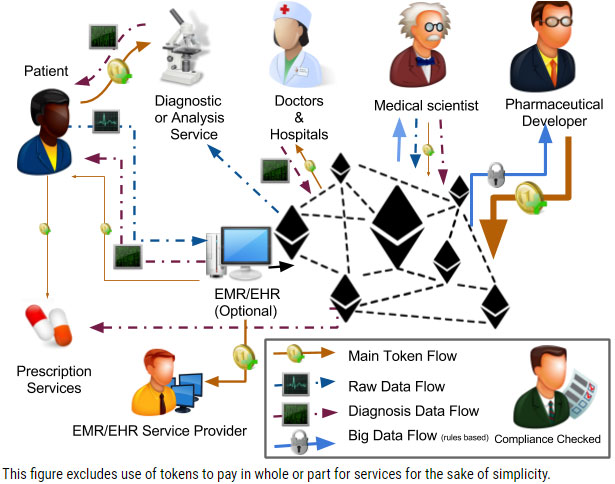 In order for MediChain to avoids the scaling limits that other blockchains we will be refining the normal offchain data storage model as we develop the solution.
Team member Dr Asaf Azaria has already developed a pilot system, MedRec which we will use to both as a proof of concept and to start. Integration between blockchain storage of pointers and data in cloud is relatively simple work of hours or days.

We have further solutions under development to make the system significantly faster and more than keep up as we add records and patients.

When considering the type of scenario we wish to avoid, a typical high-grade Bitcoin network client stores the entire transaction history, and this record for bitcoin, in 2017 was already 100GB. The more transactions processed on the network, the faster the size grows and this easily outstips Moore’s law.

In addition to the need to store a large chunk of data, the data has to be downloaded as well. This is not practical if hundreds of gigabytes need to be downloaded by either doctor or patient a process that could take many days.

And that Bitcoin-blockchain transactions are recorded only once every 10 minutes.

This simply is not going to work for normal doctor-patient interactions far more medical devices syncing daily or even more frequently.

What’s more in blockchain, in order to increase payments security, it is standard practice to wait 50 minutes more after each new record appears because the records regularly roll back.
This is why you don’t buy a snack using bitcoins. Unless you want to stand in line for an hour at the store. For sequenced medical procedures in a clinic or hospital that will not be workable either.

Malanov claims that Bitcoin is used by just one in every thousand people on the planet and says that given the transaction-processing speed, significantly increasing the number of active users simply isn’t possible.

To overcome this the MediChain architecture needs to take a better approach. What that comprises is being divided into index blockchain(s), horizontal sector blockchains with each chain holding data for a specific set of ailments. We are also considering how to implement vertical patient blockchains, the latter allowing users to locate the former across the cloud
Thus each disease would has it’s own blockchains relevant to a specific ailment and research community which could be mined in that community by academics and companies with an interest in that particular set of ailments.

Implementing the horizontal blockchains each patient-doctor interaction would therefore only have to access one repository per consultation.

Time for download of repositories would be reduced and typically specialists would have those repositories. Anonymity would be maintained by repository access in the first instance the user ID being hashed with a strong (let’s say 1024-bit sha) hash and a salt code which is either weak (pin), specific (biometric) or strong (e.g. 3FA). This might develop over time. Optionally we would allow additional encrypted user identification and an optional distributed anonymous proxy service (which can be third party to de-centralize).

There are still shared databases and require multiple access, it is still essential that there is interaction between the transactions and that we still see disintermediation of patient data. So a blockchain approach is still the best way.

Local data may also contain complete or fragments of other user’s blockchains striped across multiple users storage, which are stored for backup.