We are building the next generation cryptocurrency: LAPO Coin (LAX). Stability and speed are its main weapons to break the limits of today’s crypto-world.

LAPO Coin is just the beginning of our journey. Step by step we will provide you with state-of-the-art financial tools for crypto-payments, exchanges and more financial services.

LAPO Coin is a global cryptocurrency, which exhibits low volatility, high speed transactions and a good level of privacy.
Coins like Bitcoin and Ethereum are highly volatile. On any given day, it is common to see an increase, or decrease, up to 10-20%. That makes using most cryptocurrencies for daily transactions inconvenient.

An optimal cryptocurrency should have the following four traits: price stability, speed, privacy, and decentralization. Additional traits that will assist in the wider adoption of LAPO Coin are simplicity along with elegance of concept, easy integration points for partners and business, and ability to work with an exchange. 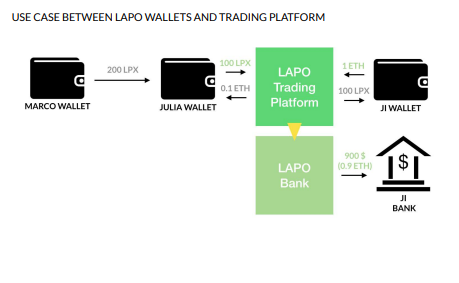 The LAPO Stability Fund is used to protect the coin against artificial price volatility of the LAX. Our completely autonomous Stability Fund can detect and avoid illegal market manipulation. Thanks to its Artificial Intelligence, it can analyse the market, social network and historical data. It will then be able to predict and understand, if and when, an illegal manipulation is taking place. The most common trigger for intervention from the LAPO Stability Fund is a “pump and dump” scheme commonly perpetrated by groups of crypto traders.

LAPO ePlatform is the stable reliable bridge that we are building to connect cryptofinance with the traditional financial industry.

Our financial services enabled by Blockchain innovation facilitates the integration and broad acceptance of this technology into the traditional finance, making transactions simpler for payments, exchanges, and more. This technology allows for easier, faster, cheaper and safer transactions.

The core currency of the LAPO ePlatform is LAPO Coin (LAX). All transactions running on the ePlatform can always be converted into LAPO Coin immediately and automatically. The LAPO Coin can then be reconverted at any time to other cryptocurrencies, or fiat at the present exchange rate.

Crypto payment
State-of-art payment API and Plugins that allow an easy integration of payment request in any cryptocurrency. The POS app can be downloaded in any modern device (computer, cell phone or tablet) and will integrate NFC communication support enabling payment with a simple touch or scanning a QR code.

Decentralized Exchange
Decentralised “wallet-to-wallet” exchange platform to trade AltCoins, LAPO Tokens and LAX. Using the platform and LAPO Bank you can immediately convert your LAX into FIAT assets or other AltCoins for a very low fee. The trading app support multiple monitors and devices.

The ambition of LAPO is to create the first integrated payment ecosystem based on a cryptocurrency. To realise this ambition, the LAPO Bank will be launched in Q4 2019 to complement the LAPO ePlatform offering.

An additional offering of the LAPO Bank will be the first loans in fiat or selected cryptocurrencies with LAPO as collateral. This will enable LAPO to establish and strengthen its positioning as innovative cryptocurrency with a wide range of use cases in daily life of consumers, investors and merchants.

The jurisdiction for the LAPO Bank will be chosen based on favorables regulation for cryptocurrencies and minimum requirements for set-up.