IUNGO is a globally distributed wireless internet service provider built with the help of a worldwide community. We are bootstrapping a community where everyone can assume responsibilities and benefit from the associated rewards for running parts of the service delivery infrastructure. Members can contribute by installing Public Wi-Fi access points on their premises and/or running parts of the service infrastructure.

Our network will rely on the existing physical Internet infrastructure to carry end-user traffic and will form an overlay network with unified end-user identification, authentication and billing systems. We will use the Ethereum network to build trusted, transparent accounting and payment infrastructure. Our mobile applications will enable low granularity service usage accounting and compensation for services rendered. Additionally to the software solution, hardware will be offered as an option, with pre-setup routers available for those seeking a consumer friendly plug and play experience.

IUNGO will not limit itself to the technical research and development needed to deploy the network at global scale, but will also build worldwide recognition of the brand. 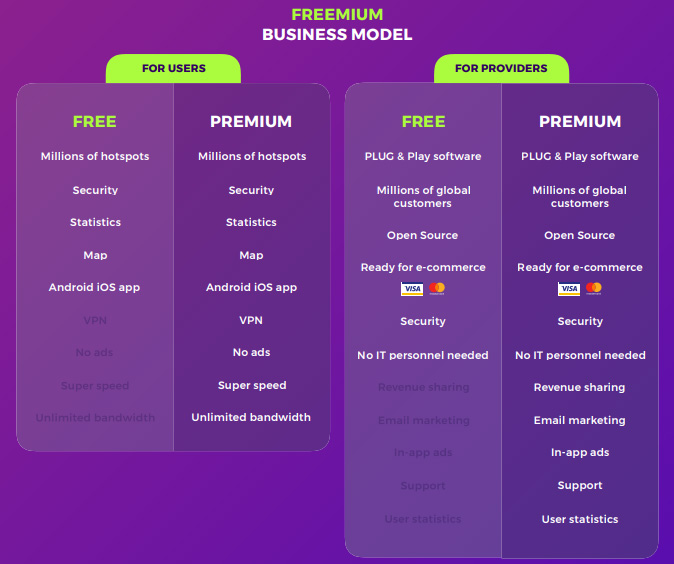 Premium services will be paid for in IUNGO tokens by both users and providers via the IUNGO wallet.

Additionally, our Open Source software will allow us to integrate third party apps and services for both users and business. These third party services will also leverage IUNGO tokens for payment, therefore creating an ecosystem of applications operating on top of the core IUNGO protocol framework.

Additionally 1% will go to the Service Gateway operator (anyone can operate service gateways).

This one percent will be distributed equally between all service gateways in a situation where multiple gateways are involved in the transaction chain. Additionally, 1% may go to local evangelists as a referral bonus. The remaining 95% (or 96% in cases when there is no referrer) of the end user payment will go to the WiFi service provider.

Payments for the service will be made with ING coins within the system. Coins will be available on a variety of exchanges. The service gateway will have integrations with major exchanges to get ING coins instantaneously in real time for a seamless user experience.

ING coin owners can either use tokens for the service or sell them on Exchanges. Despite the increasing usage of the IUNGO network and increasing numbers of users, the supply and total number ING coins remains limited, so the value should grow in parallel with the growth in adoption and usage of the network.

The Wifi Internet price is not directly related to the ING price. The price will vary due to a variety of market specifics and other factors. The IUNGO token will be used as a medium of exchange between fiat currency and the service provided.

In crafting the overall monetary policy of the IUNGO economy and tokens themselves (ING), we had several factors to consider. We had to create enough tokens to power a truly global network while balancing this with a relatively scarce total supply and a clear and transparent fiscal policy so that investors can rest assured that the tokens will healthily and smoothly increase in value as the volume of network users and providers scales globally. To that end we have decided that after the Token generation and sale event (ICO) no additional ING tokens will ever be created.

Furthermore, all tokens offered for sale in the ICO that remain unsold will be burned.

2016
The rise of the decentralization movement ignited the idea of a Global Wireless network with a swarm of community managed WiFi hotspots.
2017 Q1 / Q2 Research
Can we build it? How can we do it? How to incentivise participants?
2017 Q3 Team & Tech
Technical feasibility study, planning, testing and coding. Core team establised.
2017 Q4 MVP
Whitepaper published and MVP developed. Positive feedback from the community encourages the team to move forward.
2017 Q4 Launch
IUNGO.NETWORK launched. LinkedIn executive joins the team as an advisor.
2017 October PRE-ICO
Pre-Sale financing round begins with a 66.7% discount.
2017 November MVP
Deep focus on MVP development, refinement and public launch.
2017 December ICO
Financing round. Token generation event to support further project development, creating liquidity and a closed loop of incentives between hosts and users.
2018 Jan / Feb Hit Exchanges
Cryptocurrency exchanges are important for any token to become adopted by the masses, as it enables your token to reach a wide range of potential buyers. This will increase liquidity in the IUNGO ecosystem and the value of ING will grow in tandem as the network achieves critical mass and global scale.
2018 Jun Alpha
Alpha version of software released. A swarm of WiFi hotspots provides access via the Service Gateway.
2018 Aug Android APP
Android application release for convenient IUNGO network usage.
2018 Dec Beta
The launch of a Beta software package which will include a billing layer that orchestrates ING token flow. Focus on SME and Enterprise sales as well as attracting consumers.
2019 Q1
Multi Cell Service Gateway communications and independent providers scale globally.
2019 Q1 / Q2
Secure layer overlay from router to destination via optional VPN services providing enhanced security, anonymity and freedom from censorship.
2019 Q3 / Q4
Business partnerships with legacy Enterprises and new DAOs. Expansion through integrations / synergies with other DApps. Support for and integrations with IoT devices and services.
Tweets by iungonetwork
tweets