Iconic is an environment for the financing and offering of businesses’ assets through blockchain technology. Being the result of the necessity of bringing together promising investments and potential investors with a technology that offers a new world of opportunities through a decentralized and transparent digital structure, Iconic is guided by the premise of helping to drive and organize the development of a disruptive market having the potential of boost numerous businesses’ categories.

The company was born to strengthen and help mature the new crowd investment market that operates and establishes itself in a whole new universe, a universe of blockchain and other models of distributed trust. Iconic is the natural result of a market demand that found the perfect technology to meet it.

To date, the crowd investment market has not identified an opportunity that would allow it to thrive in retail. Private investment contracts in the traditional market demand costs that are incompatible with the risk-return they offer, even when involving small amounts of investments. In addition, they are extremely bureaucratic while at the same time offering investors little liquidity, resulting in the depreciation in value of the investments made.

The Iconic brings through the three environments of its ecosystem a complete channel for making investments in businesses with safety instruments and guarantees that are unprecedented in the blockchain industry. 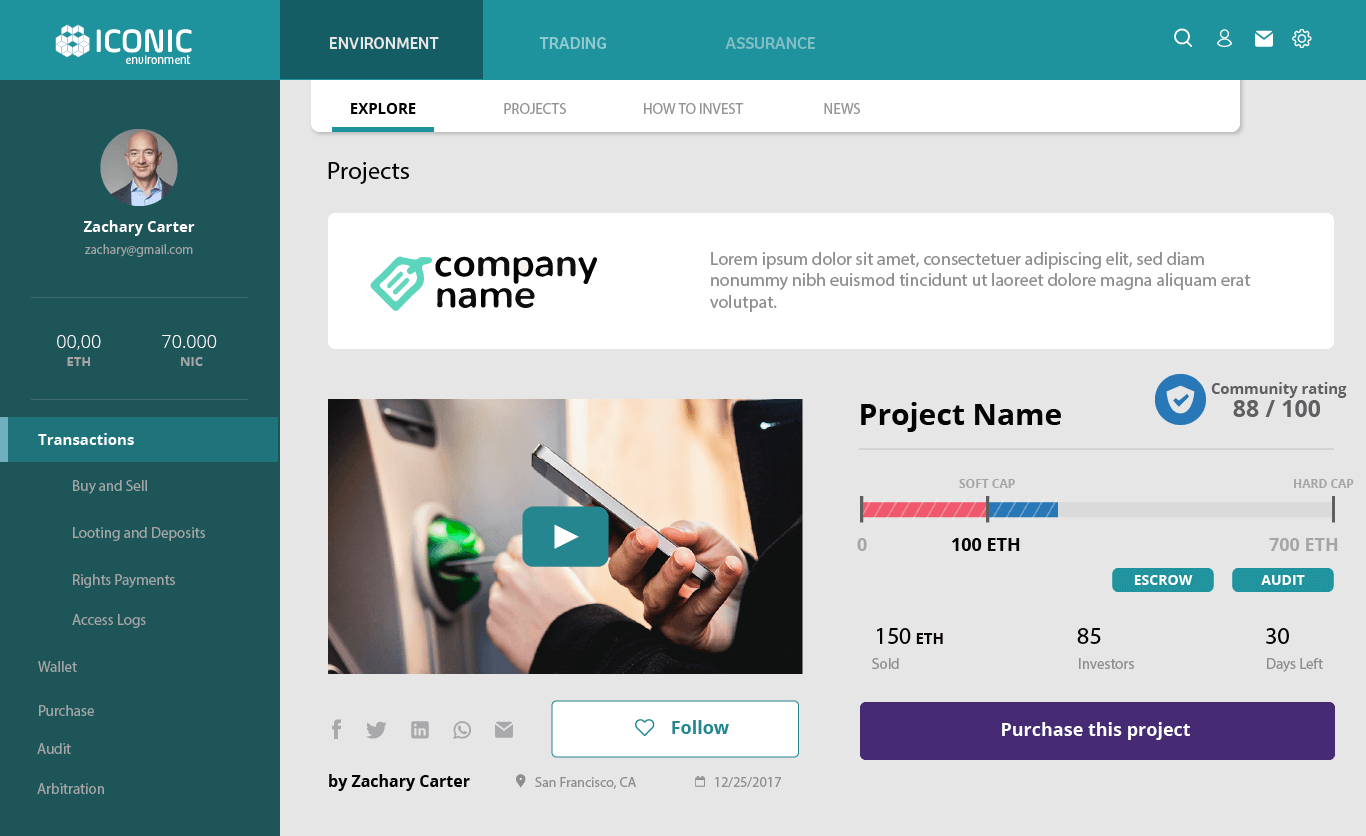 With this, we call the community through the “Let’s move the chains” campaign, offering the Iconic ecosystem to bring together different interests and, together, build an integrated, stable and secure path for this technology to achieve its full disruptive potential.

To map Iconic’s market, it is necessary to analyze two markets that, together, integrate the scope in which the company operates:

The blockchain is an absolutely revolutionary technology that has the potential to directly impact many industries and markets due to its transparency and decentralized operation.

Its employment is gradually becoming widespread and today, even being a young technology, the blockchain industry with all its applications – mostly with cryptocurrencies such as Bitcoin and Ether – is estimated to have more than 14.750 million wallets created by its users, indicating that the level of coverage is huge even if considered still far from the mainstream.

Offering return to the investor through services and giveaways or, as in the case of Equity Crowdfunding, a stake in the business, this market today corresponds to the most popular non-conventional action to make businesses viable without the presence of intermediaries.

This format, despite moving significant funds such as $ 34 billion in 2016, being $ 2.5 billion in equity alone, presents fundamental constraints that, under current conditions, limit its potential to sustain the development of the environment.

By integrating a company’s assets acquisition into a transparent and decentralized technology, it is possible to offer investors within the investment crowdfunding market a new set of features that help all sides of the business: investors, business and middlemen. At its core, the goals are the same as those of crowdfunding, where a company raises funds by sharing assets with a predefined counterpart for investors. From this similarity, the ICOs market goes further to offer significant advantages that boost the potential of the collective financing industry, uniting attributes of other business segments such as venture capital, crowdfunding, equity crowdfunding, IPOs and stock offerings in general.

Starting in 2016 and especially in 2017, the ICO environment became big and, with this growth, the year will close with investments totaling more than $ 3 billion, an unprecedented value throughout the crowdfunding industry.