Game Machine is the global open ecosystem for a game industry constructed on the basis of the blockchain technology. Game Machine will unite all participants of this market: gamers, developers, advertisers for the sake of development of the industry and improvement of game products quality.

Game Machine creates loyal gaming audience which generates cryptocurrency Gamefuel by means of the principle of limited Proof-of-Work (Limited-Proof-of-Work). Use of such an approach allows to limit access to infrastructure to not participants of the market.

The game and advertising platforms are releasing on the basis of Game Machine which allows to to communicate directly with audience of gamers, developers and advertisers are implemented.

We dream of buiding an open ecosystem for game industry without fraud and commissions. Where gamers are your investors, where developers have easy way to advertise themselves. With blockchain.

And we have plan step by step.

ALL DECENTRALISED DREAMS NEED PHYSICAL INFRASTRUCTURE. AND WE HAVE IT
Game Machine creates loyal gaming audience which generates cryptocurrency GMT by means of the principle of LPoW (Limited-Proof-of-Work). Use of such an approach allows to limit access to infrastructure to nonparticipants of the market. 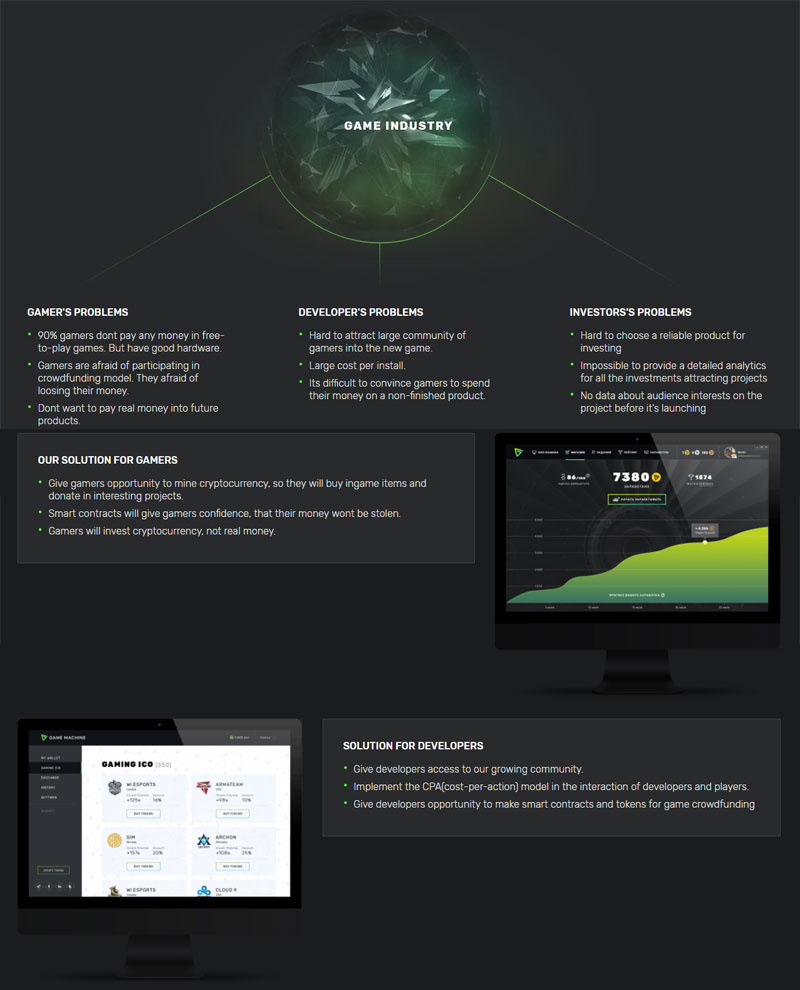 Low commissions
The commission is adapted under a game industry. The minimum size will provide an opportunity to make a binding even to micro transactions in an equivalent of several cents.

Smart contracts
Simple smart contracts and the minimum commission give the chance to create any projects for a game industry: game exchangers, shops, cybersports services to hold mass and pair tournaments, to include in the games and many other things.

Simple entrance to an ecosystem
Involvement of gamers happens with the help of a product of Game Machine Client. It is the functional program for PC allowing to use fully all power of modern technologies. The simplest and clear access to a mining, game items, transfers of cryptocurrency, crowd funding and games shops, and also social components of the appendix.

It is ready for exchange
Exchange of items or services for gamers, a game developers, advertisers most conveniently and quickly. All assets, from gaming experience to finishing items for a popular game tokenize most simply. Use of smart contracts and a blockchain does transactions and exchange the safest and transparent.

Safety
Realization of the main currency in Game Machine ecosystem (Gamefuel) fully corresponds to the CCSS standards in order to ensure of the maximum indicators of safety.

Game Machine — blockchain, which is realized on the basis of a blockchain-framework Scorex 2 from Scorex Foundation. Scorex 2 the powerful blockchain-framework written in the Scala language, allowing to realize necessary functionality of Game Machine, such as smart contracts and the principle of LPoW. This the framework positively proved in several large and known blockchain-projects, one of the most famous representatives — the Waves platform.

Game Machine will be implemented in blockchain at the program level and to limit:

Thus, the mining will be limited only for gaming computers.

Blockchain realisation of Game Machine and the algorithms used for a mining will be is in the general access in Github system, but are defined at a design stage of a blockchain.

Besides restrictions which force to use only own blockchain also the feature in realisation of all necessary functionality is added and to provide addition and new opportunities in Game Machine ecosystem. Firstly, it is implementation of smart contracts for creation of DApp on the basis of Game Machine, and also freedom in introduction of all modern and innovative solutions for development of all blockchain-sphere.

Gamefuel — basic currency of a blockchain of Game Machine with an open code of the smart contract and received in an award for a mining. All functionality of Gamefuel will be realized according to CCSS standards for achievement of the maximum indicators of safety.

In currency of Gamefuel there can be 18 signs after a comma, the minimum value of cryptocurrency 1 * 10^-18 Gamefuel = 1 ence.

March, 2017
- Creation of a concept of the project. - Investment of own means ($80 000); - Start of development of the project.
May, 2017
- MVP Game Machine blockchain protocol and gateway to withdraw in-game items; - Receiving Pre-seed of investments ($120 000); - Start of development of Game Machine Client
September, 2017
The closed beta test Game Machine (mining, conclusion of the objects WoT, CS:GO, Dota 2)
October, 2017
- Testing the advertising model using third-party advertising based on the beta client; - Creation of the Game Machine mobile application, - Addition of objects and conclusion in the games Warface, WarThunder, World of Warships; - Creation of a private office of the investor.
November, 2017
- Addition of a possibility of purchase for coins of the games Steam and transfer to the Steam-account. - pre-ICO
December, 2017
- Carrying out ICO. The purpose — $20m; - Main improvements Game Machine PC Client and App
January, 2018
- Start development own advertising network - Ads Machine - Development of referral system - Development of the system of pumping and rewardings for gamers
February, 2018
Development of the website for control of a miner and introduction of additional functions.
March, 2018
- Transfer of a miner to Gamefuel blockchain; - Exchange of tokens of GMIT for Gamefuel; - Development of iOS of the application for management of a miner and additional awards for gamers.
April, 2018
- Gamefuel conclusion to the exchanges; - Gamefuel Wallet creation.
June, 2018
Start of MVP Ads Machine.
August, 2018
Ads Machine start.
September, 2018
- Development of external API Game Machine. - MVP Rise Machine.
December, 2018
- Development of internal game shop for indi-developers. - Rise Machine start
March, 2019
Development anti-fraud on the basis of blockchain technology decisions for advertising displays on partner resources.
July, 2019
Expansion of advertising network Ads Machine for displays on partner resources.
September, 2019
MVP Exchange Machine.
November, 2019
Exchange Machine start.
Tweets by amemachineapp
tweets