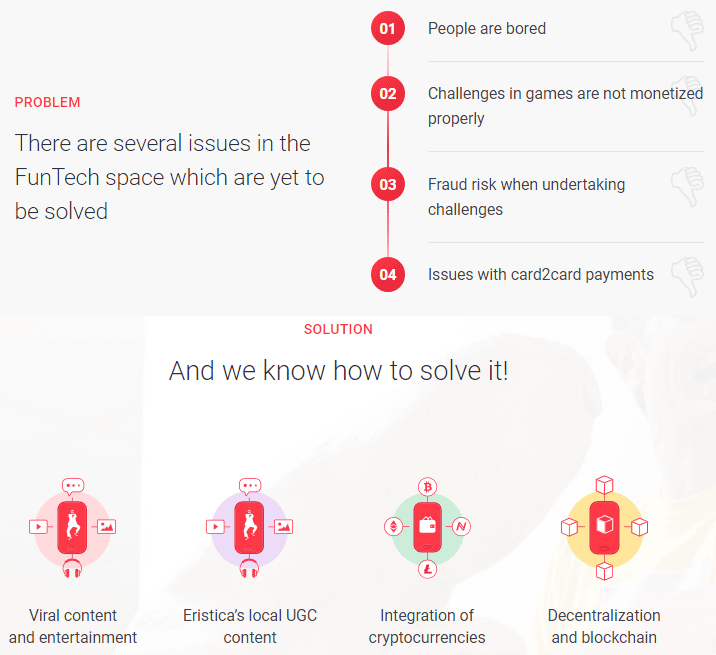 Eristica is a revolutionary P2P-platform that drives participation in challenges and online competitions. The project was launched in 2015 and has already got more than 1.2 million users.

The platform enables each participant to launch and accept challenges, provide video footage of challenges completed and get ratings based on the results.

Eristica users are also allowed to generate viral content with the videos of challenges getting millions of views on YouTube, and the winners becoming stars. The system of rating, reputation and ranking creates a powerful incentive for active participation.

Competitive incentive makes players fight for top places in the rating, in the quest for fame and prizes.

With the help of blockchain technology, the Eristica project intends to overcome the obstacles faced by the industry and create a single ecosystem for both offline and online competitions.

Tokenization of the platform’s economy will offer the opportunity to get a reward for winning challenges, receive virtual reward from successful predictions and buy access to all services of the platform.

Eristica is a universal platform, where each member of the community benefits from the synergy created within the ecosystem. 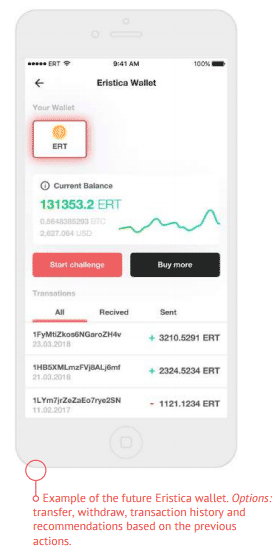 The users of Eristica will get the opportunity to create completely different types of challenges, including competitions in online games, offline bets, as well as mass competitions, which is a unique advantage of the project.

One other great feature of the platform is the freedom afforded to users when it comes to choosing the number of participants and members. There may be one-vs-one, one-vs-many and mass competitions.

At the heart of this project is the ability to digitize the industry coupled with democratization and unification of all business processes in the platform. The platform brings offline challenges to online with the help of a user-friendly interface.

Challenges will be created according to a set of uniform rules while the terms of the bet will be confirmed in a smart contract and executed automatically.

Democratization will make the industry affordable to everyone. With a single click, one will be able to challenge thousands of participants to compete or guess the winner of the current challenge and get rewards for it. In other words, Eristica’s ecosystem allows everyone to pick a suitable level of participation depending on preferences.

The project was started as an idea in 2014. It was at the time, when Nikita Akimov, the founder of Eristica, began working on the prototype of the application, forming the team and experimenting in the search for the best way to interact with the challenge community.

In 2015, the first public version of the Eristica application became available for download on Google Play and iTunes.

In August 2016, the project took part in the startup competition held by Winter Capital venture fund and the McKinsey & Company consulting company. The Eristica team shared the first place with two other projects, winning the prize of $75,000. This was the first major recognition of the project.This is the same year that the project started growing in popularity reaching 500,000 users.

At the beginning of 2017, the Eristica team focused on rapidly developing region of Southeast Asia and India which is known for high demand for local entertainment content. That was one of the reasons why Eristica was invited to participate in the acceleration program of the startup Mobile Only Accelerator (MOX), managed by the SOSV fund.

This market became both an opportunity and a technological challenge for Eristica.

The application was rebuild to work in the area with low speed Internet:

In the middle of 2017, the project team successfully completed the program in SOSV accelerator, which is one of the largest venture capital fund in the world. SOSV fund ranks first in “Investments in the early stages” rating, ahead of other top giants like YCombinator and 500 Startups.

Co-founder and President of Cryptonomex