We introduce a blockchain-based task market system consisting of clients, freelancers and reviewers.

Clients post job offers, freelancers apply for these and reviewers are stake-holders that put down a deposit, at least equal to the value of tasks they intend to be reviewers for, and define their area of expertise; in the case of a task dispute for which they were selected into the review panel, they are required to cast a vote on whether the task was completed or not. Reviewers will want to define their areas of expertise honestly, otherwise they risk losing in the consensus mechanism. Reviewers get a percentage of each task value even if no dispute process is initiated, and if a dispute is initiated, they get a larger percentage as compensation. Also, all TaskCoin holders get a small percentage as adividend. In the simplest case, the client and the freelancer will agree on the job outcome. If the job is completed, the freelancer gets paid, and if it isn’t completed or the deadline expired, the client gets a refund and the freelancer’s deposit. Clients put a deposit equal to the task value, while freelancers need to put down 10% of the task they applied for. The freelancer deposit is used as a measure against wasting the client’s time, as without it, freelancers could basically DOS the system. It is also used to initiate disputes, as it will be paid to reviewers as compensation. In case of a dispute, depending on the result, either the freelancer or the client will lose 10% of the task value, that will go to the reviewers.

Also, 10% of each reviewer’s deposit who voted against the consensus or did not cast the vote, is distributed among other reviewers in the panel. Otherwise, if disputes were sufficiently rare, it could be reasonable for reviewers to ignore their duty in case of a dispute, and just collect the fees from tasks that were not disputed.

Review panels are created for each dispute and consist of randomly selected reviewers. There are 10 reviewers on average in the panel, though that number is not deterministic. Reviewers are not aware of other reviewers. Voting is done in two stages: commit and reveal; the idea being that no reviewer can wait to see how other reviewers voted. The proposed system satisfies Nash equilibrium as no party has incentive to change their game strategy, considering that other parties keep their strategies fixed.

The system blockchain is a Monero fork, as ring signatures hide the sending address, making the task creator unknown, as well as reviewers when applying for the panel after learning that they were selected. The reviewer selection mechanism is built into the blockchain; it could be thought of as a hard-coded smart contract.

The system does not rely on reputation to assure fair task evaluation. While reputation can be used as part of the task applicant selection process on the task creator’s part, it is not a necessary component that ensures system soundness. Systems relying on reputation, among other complexities, such as potential Sybil attacks, face the problem of initial reputation. That is, a system can be unstable if there are no members with established reputation. On the other hand, giving some initial reputation to selected users can be arbitrary and goes against the decentralized philosophy. 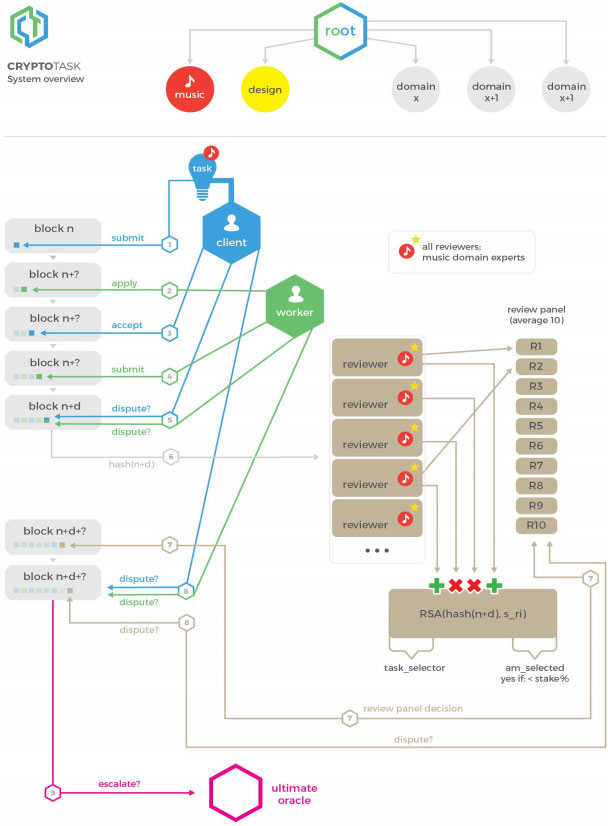