BUFF – A LOYALTY PLATFORM THAT REWARDS GAMERS SIMPLY FOR PLAYING

Nowhere in the gaming industry – mobile, desktop, or console – is there anything like a “Star Alliance” loyalty program.
So, we have decided to build BUFF – a decentralized loyalty platform that rewards gamers simply for playing.

Participants earn BUFF coins by playing their favorite games. The coin allocation process is performed in the background; therefore, it doesn’t interfere with the gameplay or require any additional expenses (installing the BUFF Wallet is free). BUFF coins can be redeemed for virtual in-game items across various brands and platforms.

BUFF’s decentralized gaming loyalty platform is a groundbreaking cryptoeconomy ecosystem based only on gamers’ merits, in which gamers earn BUFF coins in direct correlation to their progress, achievements and time spent gaming, regardless of their hardware capabilities. Through its extensive network of corporations with different gaming platforms, BUFF hopes to enable holders of BUFF coins to purchase virtual goods across multiple gaming brands; trade with other holders and gamers on BUFF’s wallet which is based on blockchain technology for maximal security and transparency.

BUFF is using Blockchain technology to build our very own decentralized “mileage/token economy” for gamers across all games worldwide, fueled by our own issued cryptocurrency: the BUFF coin. Gaming is a $116B a year market (2017) with 2.5 billion users and an 10% YoY growth . The gamers and the gaming market value spreads between tens of thousands of small-medium-large brands, with a few mega-hits dominating the industry in terms of both number of active gamers and revenue from in-game purchase.

From “Clash Royale” to “FIFA”; from casual games to high-end quests, each has its own silo economy of points for achievements, rewards and in-game purchases. The problem, however, in our view, remains that gamers cannot generate, bank, or accumulate their efforts into something tangible, such as a standardized currency, usable across different games, platforms and exchanges. We view games as an archipelago of different brands: each one being centralized, governed by its own one-sided rules, with currently no way to connect them in a fully decentralized manner and with as many wallets and “game currencies” as there are games in the industry. BUFF aims to unite them and create the world’s largest gaming economy, running on our decentralized cryptocurrency: the BUFF coin..
Now you know the “why”; this white paper will explain the who, what, when, where, and how.

The core team of BUFF is combined of experienced entrepreneurs from successful digital ventures, all with a proven track record of building global digital businesses from idea to reality, from startup to IPO. Our accumulative track record consists of onboarding and servicing users, commanding hundreds of millions of app downloads, generating tens of millions in revenue, and launching successful ICOs.

BUFF has teamed up with the experts behind Overwolf – a leading gaming platform responsible for the creation of numerous big-name titles within the industry. Overwolf’s team of coders, designers, analysts and gamers form an integral part in building and distributing BUFF.

BUFF is all about striving to create a decentralized economy that empowers gamers and benefits all stakeholders. Our advisors help us shape this economy; we believe that it’s a dream team of gaming and Blockchain enthusiasts 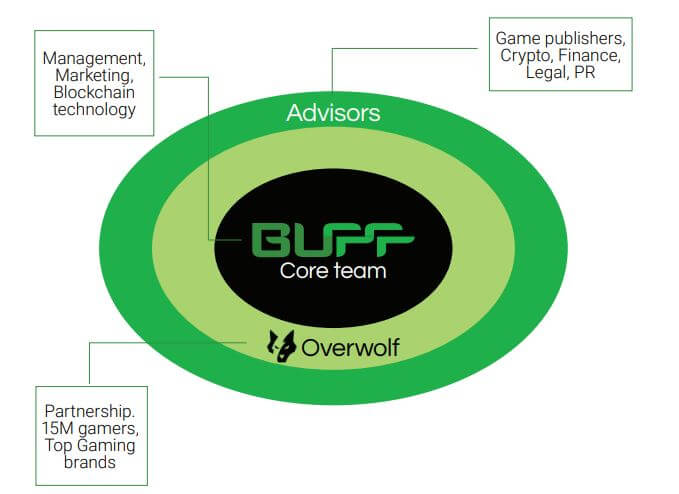 The Ecosystem: problems and solutions

Games go far beyond entertainment. It’s a culture that unites people everywhere regardless of language and territory, gender and age, wealth and education.

It’s a deep and meaningful relationship with brands the likes of which no other industry boasts.

As part of this culture, gamers expect rewards for their brand attachment and to be able to utilize such value across various games and platforms.

Whether it’s eSports, which centers around competitive teams, or games intended for individual gameplay, the vast majority of current-day conventional monetization of games is based on the in-game purchases of skins, mods, and unlocking of achievements.

For example, 82%7 of Apple’s and Google’s mobile app store revenues comes from games. The revenue run-rate of iOS and Android from games alone is estimated at $12.5B per quarter (Q3 2017)  .

Gamers spend hours unlocking achievements, which they can often later use to redeem virtual goods or trade with other gamers in exchange for ingame assets. In each of these cases, the gamers are hostage to the current monetization model and have no other way to finance in-game purchases.

BUFF aims to open up new opportunities for gamers to purchase in-game items by rewarding them with BUFF coins for their loyalty and time spent playing their favorite game titles and brands.

BUFF plans to allocate coins based on gamers’ skills, loyalty, time-spent, and number of achievements unlocked, with no dependency on gamers’ hardware. Our vision is for BUFF coins to be used as a standard currency for purchasing virtual in-game products across game brands and platforms, and to be gifted between gamers to facilitate collaboration between them. BUFF would only be available for skilled-based games in order to provide fair play and will not support games of chance of any sort. 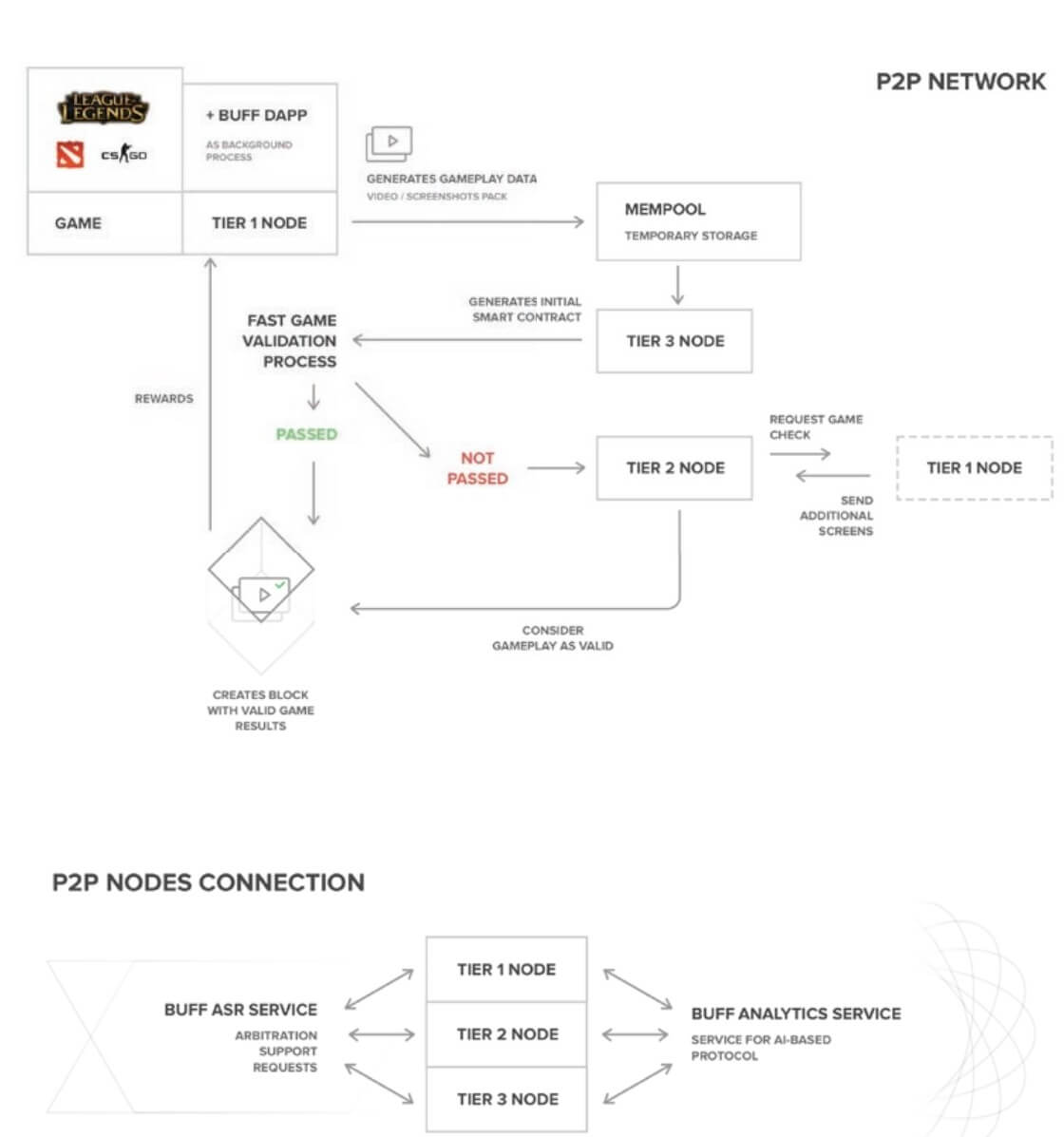 P2P interaction – our vision is for BUFF coin holders to redeem, trade, and gift their coins with others, as well as create clans/groups of users that would be rewarded coins individually via pre-determined smart contracts, factoring the aggregated stats of clan members.
Transparency – Community statistics, rankings, offers and rewards would be distributed in a public and secure way, utilizing the added values of a distributed system.

Fraud prevention – BUFF intends that the community monitors suspicious activities, bots, and cheats which would be handled through pre-agreed consensus nodes.

Interoperability – A loyalty program based on Blockchain technology can unite multiple siloed ecosystems (games) under one roof, using a standardized BUFF coin to make purchases of virtual in-game products across platforms and partake in community events.

The benefits to gamers

Earn cross-game coins while gaming, without the hassle of hardware dependency. A groundbreaking cryptocurrency allocation technology, which substantially benefits gamers by enabling them to leverage time spent gaming in order to accumulate BUFF coins.

We anticipate that the BUFF coins, as a standardized, widely-accepted gaming industry coin, will allow quick and safe trading of virtual in-game products across different game brands through a simple transaction at minimal fees.

The gaming industry is among the most successful and rapidly expanding within the entertainment consumption sector 9 . With 2.5 billion users, a market of over $116B (2017), and an 10% YoY growth 10 , the industry covers tens of thousands of brands in various sizes and reaches mass audiences across borders, platforms, and technologies

Although tens of thousands of game titles are available in the market, close to 1.4 billion users are actively participating in the top 10 titles alone, such as “Dota2”, “League of Legends”, and “Counter Strike”. 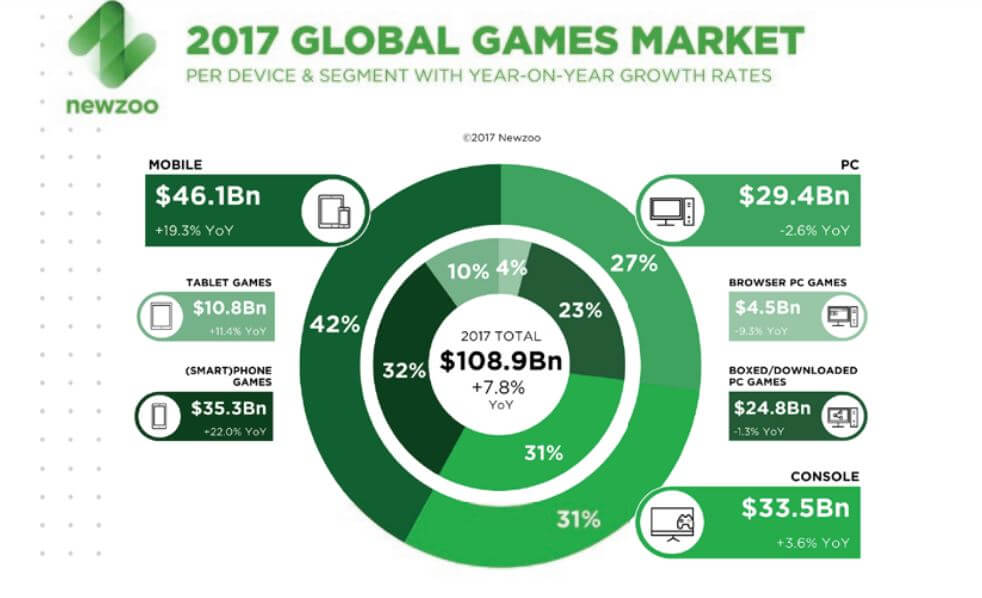 What started as a small tight-knit community in the early 1990’s has transformed into a cross-culture, massive industry with a steady growth in these numbers both in previous years’ statistics, and following years’ forecasts. The gaming industry is competitive, results-driven, lucrative, mixing smart management strategies with evolving technologies and fresh, creative ideas. Such a dynamic industry attracts many companies, both international entertainment giants and small indie groups.

Although tens of thousands of game titles are available in the market, close to 1.4 billion users are actively participating in the top 10 titles alone, such as “Dota2”, “League of Legends”, and “Counter Strike”.

2018
Roadmap for this year includes ICO completion and launch of desktop version with 5 leading brands such as “League Of Legends” and “Dota 2”. BUFF utilizes a set of ERC20 smart contracts aimed to execute and test functions and behaviours. All smart contracts will be published on GitHub. The BUFF coin will be offered to users of the Overwolf gaming platform and will later be marketed to wider audiences. This phase will be defined as “beta” for 6 month to allow fine-tuning and optimization of BUFF.
2019
Roadmap for 2019 includes adding mobile platform support and adding many more gaming brands. On the marketing side, user acquisition campaigns will be increased to build and bolster the BUFF community.
2020
Roadmap for 2020 includes launch of publishers’ SDK, support for major consoles and full scale service for the BUFF community. An SDK will allow publishers to self-service BUFF integration and expand the reach of BUFF. Support for consoles means the use of BUFF on platforms such as Sony’s Playstation and Microsoft’s Xbox. With all major platforms and brands in place, the plan is to double down on marketing and fuel the growth of the BUFF community.
Tweets by BUFF_Team
tweets