Loyalty is trust. Trust is called a new currency, much like the bitcoin, because the difference in trust between a company and its competitor directly translates into how much money each is going to make.

Every year millions of retailers spend in excess of $20 billion on software that improves the loyalty of their customers. They need to do that in order to stay competitive in the today’s crowded marketplace.

Loyalty programs are not only costly, but also time consuming and cumbersome to set up. Often times, customers get only more frustrated from participation in them, complaining about difficulty to earn points or bonuses and to redeem them. This results in the fact that most loyalty programs just don’t pay themselves off, and shut down in less than 12 months’ time.

We are a team who has worked together for 5 years in GIFTD, an innovative profitable loyalty SaaS company that helps hundreds of small and medium-sized e-commerce businesses to increase their revenue by an average of more than 17%. We are building BitRewards as a spinoff from this successful business, because blockchain technology allows for introducing a novel approach towards loyalty and rewards market, which will create new value for customers, merchants and the community-at-large.

BitRewards is a blockchain loyalty platform and ecosystem that enables retailers to reward their customers’ purchases, friends’ invited and other configurable actions with crypto-currency. It has an absolute value for the customers, as they get for their purchases the liquid Ethereum-based tokens, which can be redeemed for purchases or transferred to another crypto-wallet. The price of the tokens is also set for growth due to our unique business model, so these rewards may go up in value in the course of time, rather than expire. BitRewards also brings a lot of benefits to the retailers, because they get customers that are more satisfied with the rewards in crypto and become even more loyal. A comprehensive loyalty program increases the retailers’ revenue by dozens of percents. The stores are also tapping into the cryptoenthusiasts audience, which is quite active and appreciates the attention from the regular businesses.

The unique value proposition for the retailers is that BitRewards will offer this valuable and expensive loyalty technology free of charge. The retailers will only have to buy BIT in the open market to reward their users. The value of such software starts from $200/month, therefore thousands of retailers will be keen to connect to the platform. We can make such a claim, because we operate in the market of rewards and loyalty software for more than 5 years, have more than five hundred clients – online stores and deeply know their needs. BitRewards also uses AI-based predictive analytics, which allows to configure the rewards and actions for each particular business to address its unique target audience and achieve the highest return on investment from every dollar spent on the rewards.

BitRewards is compatible with most existing e-commerce systems (Magento, Shopify, WordPress, Ecwid, etc.). It is easy to integrate and has a simple API. 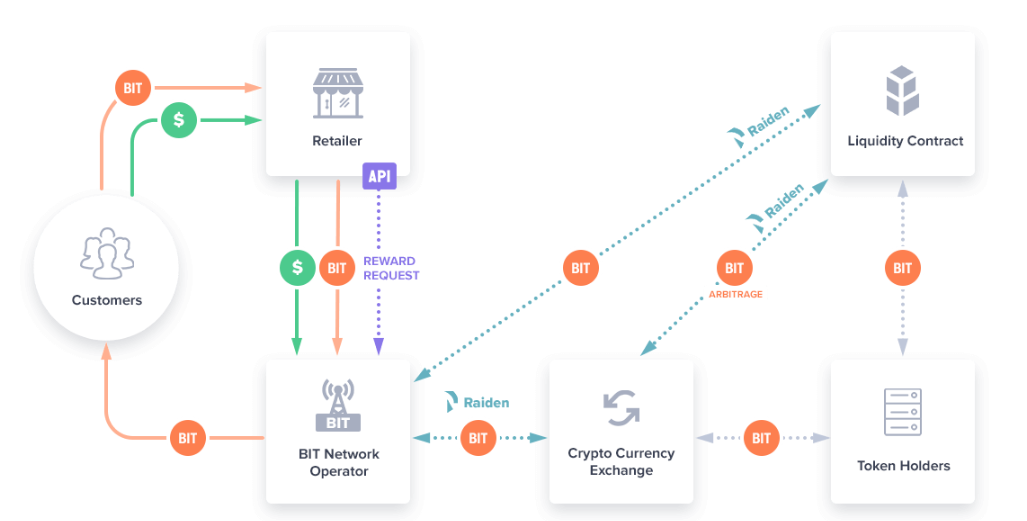 Internal BitRewards tokens are called BIT and comply with the ERC20 standard. BIT is an internal currency and is used to conduct all operations within the BitRewards ecosystem.

Customers of the online stores participating in BitRewards Network will receive BIT as a cash-back — a certain configurable amount or percent on their purchases, purchases of the friends that they referred to the store, shares and likes in social networks and other actions. The cash-back will be credited to the customer’s automatically created crypto-wallet connected to the store via BitRewards plugin.

BIT can be redeemed at the same store or with the other BitRewards participating merchants via an online crypto-wallet connected to the participating merchants. Customer crypto-wallet’s BIT balance may also be connected to the bank debit card, which the users can spend just as if they used their regular Visa or Mastercard. The customers will appreciate the opportunity, because they get a liquid crypto-currency, instead of loyalty points.

The customers can also buy BIT on the open market (e.g. exchanges, etc.) or via the Bancor liquidity smart contract.

The private key to a token holder’s BIT can be stored on the wallet provided by the BitRewards network platform, on the standard Ethereum wallet, or on any wallet supporting the ERC20.

The value of the BitRewards token will be determined on the open market, but only after the listing formalities are completed and the tokens are allowed to be listed on the trading platforms. In most exchanges tokens can be converted into ETH, Bitcoin or fiat. The token is accepted by all merchants that use the loyalty platform and other partners of BitRewards Network.

The demand for the BIT tokens most likely will grow because of the limited initial issuance of 2 billion tokens and the increasing number of retailers joining the platform exceeding the supply from the customers who redeem the tokens for purchases or trade them at the open market, which will create an ascending path of least resistance. 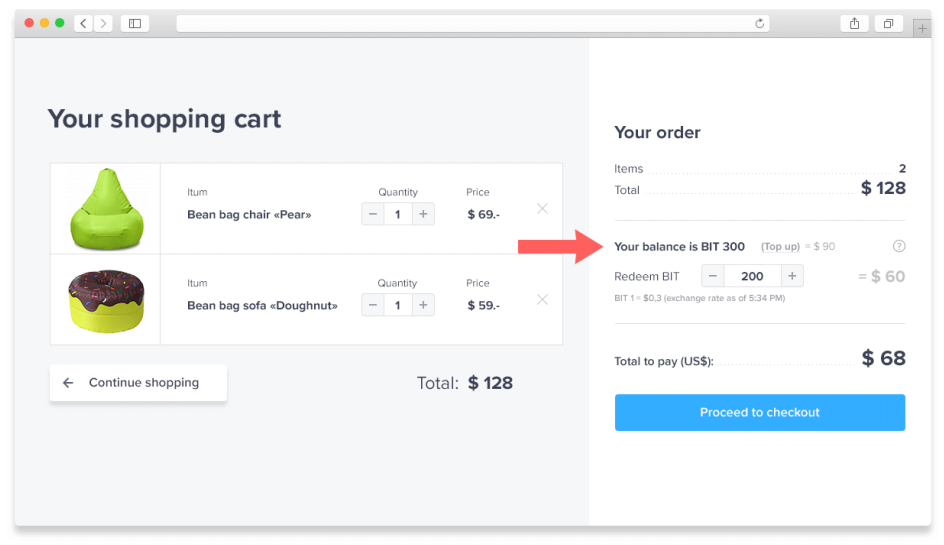 BitRewards is a blockchain rewards and loyalty system for e-commerce businesses. It enables online stores to reward their shoppers with a cryptocurrency “BIT”, which helps to increase sales by an average of 17%. Because of the blockchain and our unique business model, this cutting-edge loyalty system is offered to the businesses free of charge.

With the advent of decentralized technologies, bringing the new approach to the transfer of value, the loyalty industry is bound to change profoundly.

Now merchants and customers are arch-enemies:

The customers don’t care the loyalty to brands or merchants — they want free stuff and easily switch brands.

And the merchants need to protect their bottom line and try to extract as much from every customer as possible often slipping to manipulation.

BitRewards is designed to turn this around and make merchants and customers friends again.

It is an AI-based blockchain loyalty platform and ecosystem that enables online retailers to reward their customers’ purchases, friends’ invites, social media actions, personal details and data sharing and other valuable behavior with crypto-currency “BIT”.

“BETTER THAN CASH” REWARDS for customers.

It has an absolute value for the customers, as they get for their purchases and activities the liquid Ethereum-based tokens, which can be traded at an exchange, transferred to another wallet or redeemed for purchases. The tokens are also designed so that they can go up in value in the course of time, which will give the customers a chance to see their rewards appreciate rather than expire.

Merchants get valuable loyalty technology, which allows them to manage the behavior of their users via the data-driven set of tools, which they can frictionlessly integrate with their web stores.

A comprehensive loyalty program increases the merchant’s revenue by dozens of percentage points*. The merchants are also tapping into the crypto-enthusiasts audience, which is very active and appreciates the attention from the early adopters of technology.

The unique value proposition for the merchants is that BitRewards will offer this premium out of the box software free of charge. They will only have to buy BIT tokens to reward their users. The value of such software starts from $100-200/month. Therefore thousands of online stores will be keen to connect to the platform. We can make such a claim because we operate in the market of rewards and loyalty software for more than five years and know the problems and daily needs of the merchants.

The team of BitRewards consists of probably the strongest tech core, who works on the blockchain for the retail industry. Coupled with business development and financial expertise of other members, the team is perfectly prepared to deliver an impeccable product to the global market.

BitRewards is compatible with the most existing e-commerce systems (Magento, Shopify, WordPress, Ecwid, etc.) and has signed letters of intent with the online store builder platforms, which service more than a million online stores globally.

USA Sales and IR, Board member

November, 2016 - February, 2017
Development of a points based loyalty system GIFTD designed to reward shoppers. (Сompleted)
February – October, 2017
Structuring the concept of using Ethereum blockchain with loyalty and rewards tools and customer development of the cryptorewards for e-commerce industry, team hiring. (Сompleted)
October 2017 - May 2018
The full-functioning loyalty system BitRewards for the retailer and the user's crypto-wallet connected to the loyalty program, with access on the website of retailer and BitRewards website
March - June, 2018
Retailer Crypto-wallet and liquidity management smart contract
June - July, 2018
Integration of loyalty system with Lightning Network and Raiden Network (after the launch of these technologies).
June - August, 2018
Customer’s Mobile app with crypto-wallet.
July - November, 2018
Introduction of digital gift cards and scanning of loyalty cards into the mobile wallet.
September - December, 2018
Mobile SDK for merchants’ apps.
January - April, 2019
Integration of AI and machine learning into the BitRewards platform.
April - May, 2019
Blockchain based traffic exchange between online and offline merchants.
Tweets by bitrewards
tweets