ARNA Genomics is an innovative biotechnological company, launched on the basis of the scientific and research laboratory and a team of like-minded people, engaged in development and research of early detection methods of oncological diseases with the purpose of launch of diagnostic tests for early cancer detection on the global market.

Our mission is to increase the life expectancy and significantly reduce human mortality by means of global market launch of most recent, unique in efficiency methods of screening (screening study with the purpose of detection and prevention of disease development in population), diagnostics (correct diagnosing) and monitoring of treatment process of oncological diseases.

ARNA Genomics company has discovered a technology which allows to develop tests for different types (nosologies) of cancer. Besides, the company has also developed a unique concept of blockchain based ecosystem, which will be used as an instrument to support R&D and implementation of biotechnologies worldwide.

We have completed R&D for the first product based on our technology – breast cancer test.

Colon cancer test is currently in R&D stage. Besides, we are currently developing a blockchain platform solution – ARNA Panacea, which will soon allow to change the world by making launch of new biotech solutions against cancer much easier and faster.

We are ARNA Genomics. We are an innovative biotechnological company, launched by a team of likeminded scientists and businessmen and grown from the scientific and research laboratory into full scale venture. We develop revolutionary early detection methods for select cancers in order to launch a line of diagnostic tests for early cancer detection on the global markets.

Our Innovation: ARNA Genomics has discovered a technology enabling highly specific tests development for different cancers. Besides, the company has also developed a unique concept of blockchain-based ecosystem-grade platform intended for use as an instrument to support R&D and implementation of biotechnologies worldwide.

The test for colon cancer test is currently in an advanced R&D stage. We devote all our resources to complete development of ARNA Panacea – a blockchain platform, that will hope will change the world by making launch of new biotech and treatment solutions against cancers much easier, cheaper and faster.

Blockchain can make analogues of real time processes, which allows:

Set of these factors will impact the survival rate and human life expectancy.

Our solution of this problem is creation of an integrated ecosystem based on blockchain for conduction of all the stages, accompanying biotechnological products – from development to statistics and data collection – ARNA Panacea. 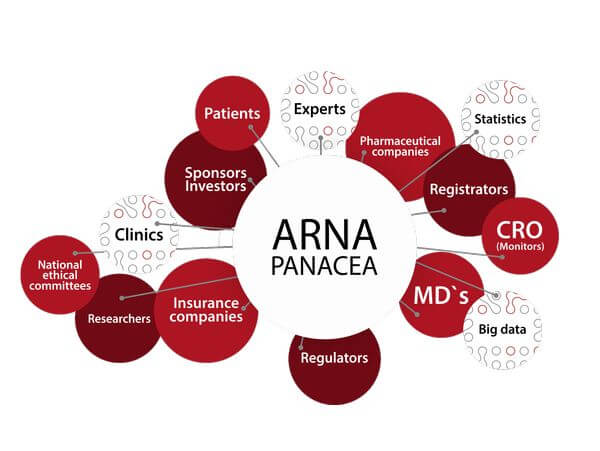 The system is expected to unite and serve the entire marketplace of global healthcare by providing multiple benefits to all stakeholders:

Founder of the project, CEO

scientific supervisor and creator of the ARNA BC test

2013
ARNA Genomics was established
2014
Seed round; Development of ARNA-Thermometr, a test for the presence of oncological diseases; “Know-how” objects formalization
2015
Development of ARNA Breast Cancer — a high-precision test for early detection of breast cancer
2016
Development of ARNA Colon Cancer; ARNA BC development is completed; Beginning of laboratory tests of ARNA BC; Submission of patent application No 1
2017
End of laboratory tests of ARNA BC; Start of ARNA BC clinical research jointly with Sechenov University; Submission of application of Patent Cooperation Treaty No 1; Token Distribution Event
2018
- Opening of the office and the 1st laboratory unit in the USA. - Submission of application of Patent Cooperation Treaty No 2 and 3. - Agreement of the regulatory strategy for ARNA BC. Launch of clinical research No 1 in the USA with FDA. - ARNA CC development is completed, starting laboratory research. - ARNA Panacea – launch of the beta version of blockchain-ecosystem, basic documentation for develop
2019
- Using of ARNA Panacea’s blockchain ecosystem by interested market players (regulators, investors, users, etc.) - Start of development: ARNA Lung, ARNA Liver, ARNA Pancreas; - ARNA BC’s entry into the US market; - Clinical trials in China; - National phases: USA, China, India, EU, UK, Israel, Brazil; - Seed round B; - Receiving the first revenue.
Tweets by ArnaGenomics
tweets